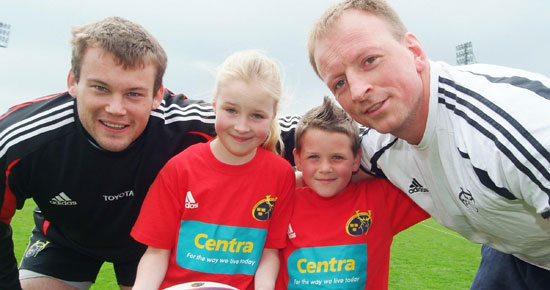 The 2009 Centra sponsored Munster Rugby were officially kicked off in style yesterday when Munster Rugby stars Mick O’Drsicoll and Denis Fogarty lined out to announce the details of the camps.

The camps are aimed at budding rugby stars aged from six to twelve years of age and will run throughout July and August in a range of venues throughout Munster.

This is the second year of Centra’s sponsorship of the camps which are aimed at giving rugby enthusiasts a week long action-packed rugby experience. Not only are the camps a great way for kids to get out and about during the summer, they can also improve their rugby skills and techniques as they are coached by a panel of experts who are all qualified at mini rugby level under the IRFU Coach Development Pathway.

All activities at the camp are child-centred and encourage the development of young players through playing and fun activities and will help keep kids fit and healthy during their school holidays.

A highlight of the camps will be the opportunity for participants to meet their rugby heroes, as members of the Munster rugby squad are due to appear at the camps in the province during the course of the week. All those who register for the camp will receive an official Munster summer rugby camp pack containing Canterbury shorts, Canterbury summer camp T-shirt, Canterbury socks, rugby ball and a gym sack.

Speaking at the launch Des O’Mahony, Brand Communications Manager Centra, said: "Centra are once again delighted to sponsor the rugby summer camps in Munster. Rugby is a hugely popular sport in Munster and even more so after Ireland’s historic Grand Slam win and Munster’s continued success in the Magner’s League and Heineken Cup. Centra is proud to give the budding stars of the future a chance to learn from the best and have a bit of fun at the same time. Camps will run throughout the province and we would encourage early registration to ensure your place is secured".

Venues and dates are listed below: