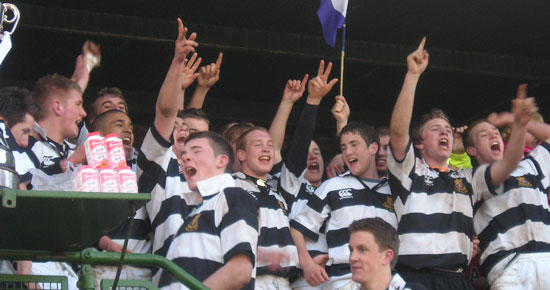 It was a great day for Presentation College as they qualified for both the Bowen Shield and McCarthy Cup Finals.

Presentation Brothers College booked their place in the final of the Bowen Shield with a 16-9 win over Rockwell at Wilton.

Playing with the wind in the opening half, Brian Haugh kicked two penalties to put Rockwell 6-0 ahead. Steve Dinan had the Cork side level by half time with two penalties.

Dinan put Pres’ ahead with a third penalty and a try by full back Seamus Glynn which Dinan converted extended the home side’s advantage. Rockwell’s only reply was a late penalty from Haugh.

Pres’ must now await the winners of the other semi final between St. Munchin’s and Christian Brothers College. This tie was postponed and is rescheduled for Friday 27th in Corbally with a 2.30 kick off.

Pres’ and Crescent Comprehensive will meet in next week’s final of the McCarthy Cup. Pres’ defeated arch rivals Christian Brothers College 9-7 at Wilton in their semi final tie.

Having elected to play with the wind, Pres’ raced into an early 7-0 lead after two minutes when great work by the Wilton pack saw Michael McCarthy touch down and Conor Flanagan converted.

However Pres’ had to wait until stoppage time in the opening half before they added to their total. A move started by Conor Casey saw full back Paddy Hegarty weave through the Christians defence to touch down and Flanagan converted for a 14-0 half time lead.

Christians hit back immediately after the break. A penalty effort by Thomas Quinlan in the opening minute fell short of the target, Minutes later Christians were awarded a penalty in a more favourable position, but opted for a quick tap and wing forward PJ O’Sullivan-Greene touched down and Quinlan converted.

Little was seen of Christians as an attacking force after this as Pres’ raised their game and the home side sealed the victory when replacement prop Steven McCarthy touched down a minute after just coming on the field in the forty ninth minute.

Crescent Comprehensive booked their place in next week’s final after they defeated Glenstal Abbey 15-3 in the other semi final at Dooradoyle..

A Greg O’Shea try had Crescent 5-3 ahead at half time. Kevin O’Keeffe kicked a penalty for Glenstal. Cormac Blake and Rory Noone added further tries after the break.

Villiers defeated Carrigaline Community School 15-11 to reach the final of the O’Brien Cup.