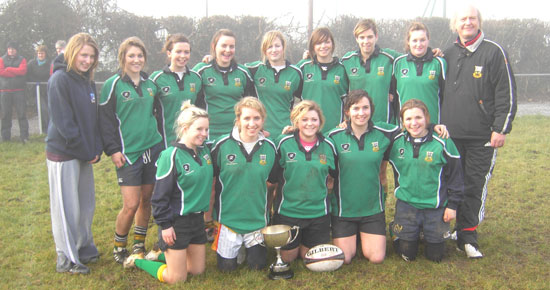 The Mallow Rugby U 19 Girls travelled to neutral venue, Thurles last Saturday to play Clonmel in the final of the Munster Cup and came away worthy winners by 30 points to 14.

This was their first ever Munster Cup at this level and even though the scoring was fast and furious this was not as one sided as the score might suggest. This senior girls competition has been dominated by clubs like Clanwilliam and three years in a row by Thurles, but the Mallow U-19’s have been together for three/ four years and even though have done well against these teams in the past they have never won the event.

The semi final last week against Shannon was a nail biting affair where a heavy Shannon pack dictating the game in every aspect. Mallow had not played a match over the wet and frosty Christmas period and were match rusty, however they still ran out winners by 20 points to 19.

The final was an all together different affair with Mallow Girls going into attack right from the whistle and with tremendous skill, pace and brilliant support-play, this looked like Mallow’s day. Jill O Donnell was the first to cross the line when she cut back against the traffic and sliced the defence in two to touch down. Jill O Donnel and Mary Kate Glynn combined well to send Brid O Sullivan careering in for number two.

The stage was set for a great game as the Mallow Girls looked to be the form side and all were playing with a sincere passion and could increase the intensity when required. A tremendous tackle by young Julia Lane on the right side of the field led to try number three to be scored by the same lady, who stepped off her left leg and left everybody stranded to touch down to give a comfortable lead by 15 points to nil. Clonmel then got into their stride and scored a great try under the posts to leave an easy conversation. This was very like a similar situation that occurred in a league match a year ago when they came back and scored a few tries in a short period of time. Even though Mallow U 19’s were three tries to one ahead, there was still a converted try would put them too close for comfort. Just before half time Leah Downes the only Munster representative this year, cut in from the left beat two players and touched down. This left a lot of relieve on a lot of faces

After the half time team talk by Coach Mervyn Shorten the entire team were under no illusion that this game was not over, words like attitude, belief, communication and complete discipline with regards to being caught off side were revisited. Mallow had to score the next try to put our minds back in the zone. The Mallow Girls started with a greater hunger to win, the handling and support play was outstanding and in this regard Hannah Lane and Emma Coakley were everywhere. The latter, Emma Coakley, put in tackle after tackle which resulted with the Mallow Girls picking up loose ball at the breakdown and gaining a quick advantage from turn overs. Julia Lane soon got on the end of a beautiful handling move to score the important first, second half try.

Clonmel scored again and converted to leave the score 25 points to 14 which gave Mallow a lot of comfort going into the last minutes of the match. However the Mallow Girls were not prepared to give up and after the ball had crossed the field twice, Catriona O Sullivan, not to be out done by her sister, raced clear with a two player overlap and touched down to give Mallow their sixth try, the lead by 30 points to 14 and the first U19 Munster title. As Julia Lane tried for the conversation with the last kick of the game there was wild celebrations and faces full of glee. This was an outstanding achievement by a great team who have been together for years. They never gave up on their belief that someday they would reach their pinnacle, admittingly, it was on the final day that these players as a team would stand on a field for the very last time as Mallow U19 Girls and win.

Supporters and coaches were over joyed with this very fine group of young ladies There was no Player of the Game as all the players had played their hearts out to take this title, from Rebecca Holt who had to play out of position due to an illness to Paula O Halloran, to Captain Mary Kate Glynn and Jill O Donnell, In addition, Megan McCarthy and Maire O Connell made a huge difference to the team when they came on and added further pace to the game. To Aisling Glynn another remarkable day, three years ago she captained an U 15 team to the clubs first Munster title, last year she was part of that team that retained that trophy at U 16 Girls, this year she has now won an U 19 title and is still part of the U17 team that plays the semi finals next weekend against Abbeyfeale at home.

Regrets must go to Jess Hurrell and Amanda McCarthy who both missed the semi final and final due to an illness over the last two weeks
The coach Mervyn Shorten was in jubilant mood after the game and spoke highly of his team, he spoke of the game plan that was spoken about before the game, to keep the ball moving wide, to keep offloading in the tackle and to have confidence in our ability to pass the ball at all times. When the Mallow Girls play this game at this pace there are very few teams in Munster that can live with them. He could not be more complimentary of all his players and stated it was easy to coach a very talented and loyal bunch of players