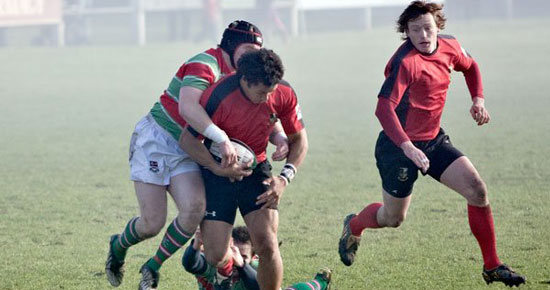 Clonakilty won the big local derby relegation clash in the Second Division of the AIB All Ireland League as Midleton’s lead at the top of Division Three is down to a single point.

A second win within seven days has seen Clonakilty move up four places in the table after their 32-8 home win over Highfield at The Vale.
This result leaves Highfield second last and with five games remaining the Woodleigh Park side have it all to do to hold their Second Division status. Home games in the next two weeks against Trinity and Terenure will be crucial in determining where they will finish at the end of the season.
This victory will be a big boost to the West Cork side and with another home game next week against fellow relegation strugglers Old Crescent, another win should ensure Second Division football next season for Clonakilty.
Kurt Morath and Colin Mahoney exchanged early penalties before a second Morath penalty and tries from Tom Ryan and Noel O’Sullivan, both converted by Morath left it 20-8 at half time in favour of the home side.
David Kelly scored a try for Highfield with seven minutes remaining, but tries by O’Sullivan and John O’Donnell ensured a bonus point for Clonakilty and Morath converted the last try.

A late rally by Rainey Old Boys at the Towns Park saw the home side’s winning run come to an end in the Third Division as leaders Midleton were held 13-13.
With four games remaining Midleton should still win promotion as there is an eight point gap between them and Banbridge the side in third place in the table.
This was a lack luster performance from the home side who led 13-0 with fifteen minutes remaining with tries from Ger Sweeney and skipper Dave Lee and a Jeff Hitchmough penalty.
A Gavin Martin penalty opened the visitors account with fifteen minutes left, but in a grand stand finish the Maherafelt sides scored a try by winger Andrew Campbell who intercepted inside his own Twenty Two and raced the length of the field to score and Martin converted and added a penalty in injury time.

Nenagh Ormond still remain in fourth place after their 25-16 away win over bottom side Co. Carlow. John Lillis, David Corcoran and David Walsh scored tries for the Tipperary side with Lillis kicking two conversions and two penalties.

Sunday’s Well moved up to fifth place after their 16-11 away win over Portadown. All the scores came in the second half with John Kidney scoring a try for the visitors and Eamon Ronan kicking a conversion, two penalties and a drop goal.