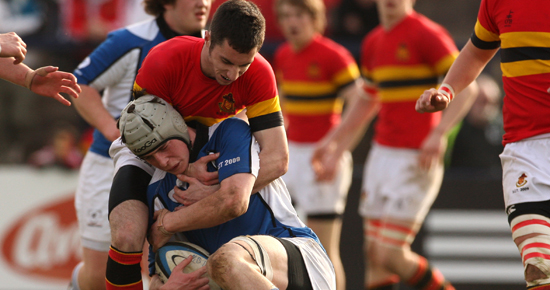 At Lansdowne C.B.C. over came the challenge of Glenstal Abbey 14-7 to book a semi final place away to St Munchin’s next week in the Bowen Shield.

Playing with the strong wind in the opening half the home side raced into a 14-0 lead after ten minutes with tries from Dylan Stokes and Robert O’Mahony, both of which were converted by Darragh McNamara.

Despite the advantage of the elements in the second half Glenstal were finding it difficult to pierce a solid Christians defence. Ten minutes from time Robert Shanahan got in for a try for the County Limerick School and Conor Kerins converted.

However in a pulsating finish the Cork boys held out for a place in the last four.

In the other quarter final tie Rockwell edged out Ard Scoil Ris 9-8.

Two penalties from Brian Hocks gave the Tipperary College a 6-0 interval lead. Hocks added another penalty after the break and Ard Scoil Ris replied with a try from Peter Reidy and a penalty by Mark McGrath.

In the McCarthy Cup semi final at Coonagh a penalty by Tomas Quinlan and a try by Shane McAuliffe helped Christians to an 8-0 win over Ard Scoil Ris.

News from around the Clubs – 15th November