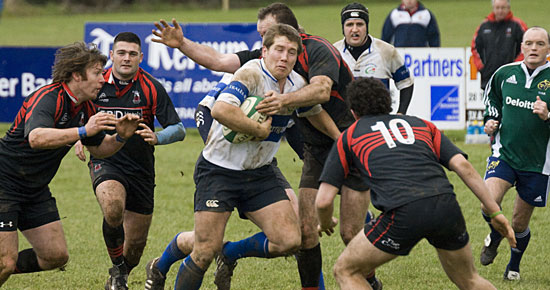 Clanwilliam are the new leaders in the Second Division of the Munster Junior League after Galbally lost their unbeaten run at home to Old Christians in the top game of the day.

An Aidan Tobin penalty and a try by Cillian Spain gave Old Christians an 8-0 lead at half time. Galbally hit back with a try by James Stapleton and a conversion and penalty by Karl Bourke to lead 10-8, but Spain struck with his second try to give the points to the Cork side.

Clanwilliam moved to top spot after they collected maximum points in their 38-19 home win over Newport. Padraig Ryan scored two tries for the winners and Bernard O’Callaghan, Robbie Doyle, Diarmuid Kiely and Ian Quinlan all got one each. Willie O’Dwyer kicked four conversions. Sean O’Gorman, Cian O’Toole and Kevin O’Brien all scored tries for the visitors and Phillip O’Brien added two conversions.

Five penalties from Darragh Meade and a try by Pat Fitzpatrick helped Kanturk to a 20-16 home win over bottom side St. Mary’s. Barry Gibbons and Matthew Ryan scored tries for the visitors and Gibbons kicked two penalties who led at one stage 16-3.
.
Tries by Andy Lynch and Peter Murphy and a conversion and three penalties by Murphy gave Kinsale a 21-6 win over Ennis. Bryan Murphy replied with two penalties for the Clare side.

Four penalties from Dave Foley and one by Eoin Keohane gave Muskerry a 15-10 win over Bandon. Sean Riordan scored a try for the visitors and David Aherne kicked a conversion and penalty.

All the top three sides in the First Division of the league continued on their winning ways, but Cashel were the only side to pick up a bonus point and they are now four points behind leaders Tralee with a game in hand.

Cashel defeated Ballincollig 58-7. The Cork side did lead early in the game when John Stevenson scored a try and Denis Galvin converted. Pat O’Connor was again their top scorer with a try, six conversions and two penalties. Darragh O’Brien scored two tries with Sebastian Lentino, Maximilliano Nannini, David Lambe, Micheal Hickey and Brendan O’Connor getting a try each.

Leaders Tralee were 14-10 away winners over struggling St. Senan’s. The Clare side led 10-8 at half time with a try by Stephen Ryan and a conversion and penalty by Declan Collins. Joe Costello was Tralee’s scorer with a try and three penalties.

Richmond remain in second place a point behind the leaders after their 12-11 away win over Kilfeacle. Wayne Murphy kicked four penalties for the Limerick side but there was confusion at the end of the game when a Kilfeacle penalty was singled as having gone over the crossbar by the touch judges, but the referee ruled it out.

Waterpark got back to winning ways with a 22-6 home win over Cobh Pirates. A try by Gerry Miller and a conversion and penalty by Brendan Walsh gave the home side an early 10-0 lead. Walsh added another penalty before half time and Brendan Ronan kicked a penalty and drop goal for the Pirates. Walsh added another penalty in the second half and Colm O’Shea kicked two to secure the points.

Skibbereen picked up the points with a 16-11 home win over Clonmel. A try by David Shannon and a conversion and three penalties by Mark Kingston were the West Cork side’s scorers, while Clonmel replied with a try by Conor Cooney and two penalties by Morgan Lyons.

Crosshaven are still rooted to the foot of the table after they played out an 11-11 draw at home to Thurles. Michael Buckley scored a try for the home side and Ger Fitzgerald kicked two penalties. Eamon Connolly scored a try and two penalties for the visitors but Thurles will regret the decision to run a penalty from in front of the posts in the dying minutes with the scores tied.

It was a great day for the four Kerry clubs in Division 3A with all four winning.

Leaders Castleisland have extended their lead to twenty one with a 16-13 win over Abbeyfeale. Mark Connolly scored a try, conversion and three penalties for the winners and Abbeyfeale replied with two tries from Robert Browne and a penalty by Paul O’Sullivan.

Killarney moved into second position after their 23-3 home win over Kilrush. Brian O’Sullivan scored two tries for the winners and Alan Mulligan got one. Sean Hickey kicked two penalties and a conversion.

Killorglin got their first win of the season with a 29-0 home win over Scariff. Andrew O’Reilly scored two tries and David O’Sullivan and John Ahern got one each. Brian Gannon kicked three conversions and a penalty.

With Charleville’s game with Carrick-on-Suir postponed, Mallow moved into second placed in Division 3B with an 18-10 away win over Dungarvan. Neill McSherry and Leonard Browne scored tries for the winners and Brian Morris kicked a conversion, penalty and drop goal. Joey Doherty replied with a try for the home side and Michael Irwin kicked a penalty and conversion.

A try by Cathal O’Keeffe and a conversion and three penalties by Joe Lee gave Fermoy a 16-6 home win over Waterford City. Aaron Foskin replied with two penalties for the visitors.

Douglas collected maximum points with a 29-12 away win over Shandon. D.O. O’Connor scored three tries for the winners and Dan Lowery got one. Andy Larkin kicked three conversions and a penalty. Barry Leahy replied with four penalties for the home side.