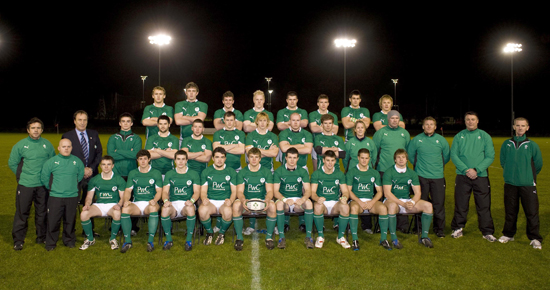 The Irish U19s defeated the Australia Schoolboys side 15-0 in the Cork Institute of Technology grounds on Wednesday evening.

It was apparent right from the start that the Irish were not going to bow to their vaunted opponents with what was the bones of the Ireland Under-18 Schools side that went so well in Parma last Easter.

Australia centre Tyson Frizell was the first to show his hand, cutting through the middle to set up an attacking position only to hold on too long on the floor. The exact same thing happened to Ireland centre Luke Marshall almost straight away.

Ireland centre Brendan Macken linked with his Blackrock team-mate Andrew Conway, sending the full-back flying down the left in a danger sign to the Australians. Then, number 8 Eoin McKeon twice made his presence felt at lineouts.

The ball was funnelled through Macken for Tiernan O’Halloran to benefit from finding space on the right and Australia’s number 8 Nathan Paila could not resist the temptation to infringe. From the resulting penalty, out-half James McKinney kicked Ireland into a tenth minute lead.

As the tempo increased, a testing bomb was not taken by Conway, and while left winger Kimami Sitauti was onto it in a flash, he ran out of room.

From there, they turned the screw when Ireland did not make their first-up tackles. Captain Jordi Murphy conceded a simple penalty which out-half Kyle Godwin missed. It was a let off for Allen Clarke’s side.

Neat work at the tail of a lineout allowed McKinney to send Macken around the outside. But he failed to get the ball away to his left winger Corey Hircock, who was playing well.

The home side got another bite of the cherry from the recycle. The Connacht-capped O’Halloran clipped over a drop goal when all options had been exhausted for a 6-0 advantage in the 20th minute.

Ireland were coming in waves now. They used the width of the pitch to keep the Australians occupied, roared on by a vocal crowd.

Out of nothing, the tourists seized on a miscommunication in the Irish midfield to come within a whisker of make the breakthrough – Macken recovered lost ground to get back and stop right winger Chris Feauai.

Godwin was wide from the penalty that ensued to leave the Irish six points clear at the break.

McKeon impressively drove the ball carrier back ten metres from the restart to give Ireland territory, from where they worked the ball sweetly for centre Marshall to twice create for others. The ball was taken right to the line without making it.

Then, McKinney’s sumptuous pass off his left hand opened the door for Hircock. It was promptly shut by the Australians. Not content with that, McKinney’s kick almost created something out of nothing in the right corner.

From the restart, lock Simon Hanbidge’s overhead take in open play gave Hircock the time to get up a head of speed, and an indiscretion at the ruck allowed McKinney to nail his second penalty from wide out on the right.

Minutes later, scrum half Peter Du Toit brilliantly snaffled the ball at the base of an Australian scrum and prop Jack Kimmince lost his patience, diving in over the top at the next ruck. McKinney struck his third penalty.

McKinney’s fourth successful place-kick came from a late tackle on Hircock as the Irish continued to keep their discipline while the opposition gave way, with Clarke’s charges holding firm for a confidence-boosting success.