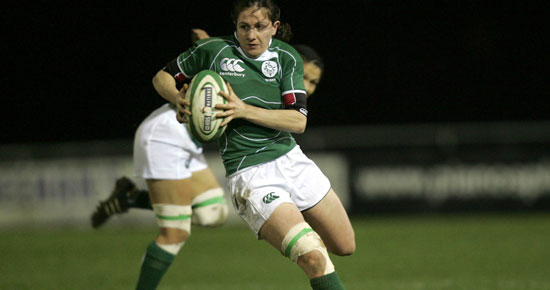 Ireland Women’s Coach Kevin West rings in the changes to the starting XV, with Highfield’s Helen Brosnan coming in at number 10, to face the England Women’s side this Sunday.

West has named his team for Ireland which includes eight changes to his opening line up to take on the England side on Sunday in the RBS 6 Nations tournament from the side who were defeated by France 19-9 in their last outing.

Six players have been promoted from the bench, Chris Fanning, Lauren Day, Kate O’Loughlin and Claire Molloy take their place in the forwards and Helen Brosnan and Nora Stapleton come in to the backs.

West has made two positional changes with Amy Davis switching from right to left wing and Joanne O’Sullivan moving from Outhalf to the Centre.

Speaking of the task ahead, West said "We are aware of the significance of the 100th Irish Women’s game and the entire team and management team are immensely proud to be involved in such a momentous occasion."

"But aside from that occasion we are aware we have a big task ahead of us. This is an important game, England have yet to concede a score in this year’s tournament. From our side, we have been concentrating on our set pieces and are looking forward to the challenge."