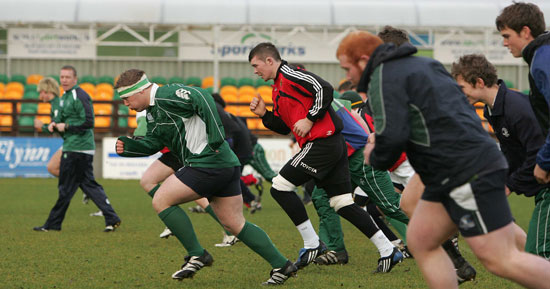 Cork Constitution No.8 Peter O’Mahony will captain the Ireland U20 team when they take on France in their opening game of the U20 Championship on Friday at Dubarry Park (KO 7.30pm)

The Ireland U20 team (sponsored by PricewaterhouseCoopers) has been named today by Ireland Coach Allen Clarke and includes an all Garryowen halfback combination with club mates Andrew Burke and Conor Murray lining out for their first competitive start together at this level.

Ian Madigan is selected at full back with David Kearney, who is the brother of Ireland Full back Rob Kearney, selected on the wing. Eamonn Sheridan, who along with Madigan and Kearney were members of the squad last year, lines out in the centre.

Ireland Coach Allen Clark said, "The attitude of the whole group has been excellent. There were some tight selections, but the players chosen have been performing consistently well for their respective clubs. I am very pleased with the standards set on and off the field – the reality is to produce an accurate performance on Friday night. France will be a huge test, but one the players are looking forward to."

"Playing in front of a home crowd in Dubarry Park is a big plus for us. I know from being a spectator last season the atmosphere created by the home support is an inspiration to the team. We aim to give our supporters a performance to be proud off."

Tickets for the game are still available from the Buccaneers clubhouse at Dubarry Park and also from various local outlets.