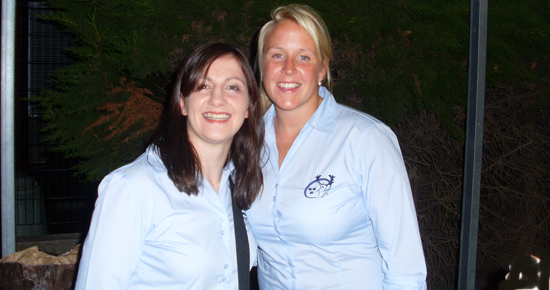 Current Irish Women’s Captain Joy Neville, who plays her club rugby with UL Bohemians, captains the Munster Women as they commence their campaign to retain the Inter-Provincial Title which they have won for the past three seasons.

The No. 8 who has 43 Irish Caps will have her fellow Irish team mate Helen Brosnan as Vice Captain for the season.

Brosnan who hails from Co. Kerry and plays her club rugby with Highfield has joined Joy Neville in leading the Munster Women to their first two victories of the season when they completed a successful pre-season tour to the South of France at the end of August.

Captain Joy Neville talks to the Munster View in the build up to Saturday’s game against Ulster in Thomond Park, view the video here.

Name: Joy Neville
HOW LONG HAVE YOU BEEN PLAYING RUGBY AND WHERE DID YOU START?
I started playing about 8 or 9 years ago.

WHY DID YOU DECIDE TO TAKE UP RUGBY?
I have four brothers, do I have to say anymore.

DO YOU PLAY ANY OTHER SPORTS?
Squash, soccer, tennis, most sports really.

WHAT IS YOUR GREATEST ACHIEVEMENT DURING YOUR RUGBY CAREER?
Captaining the Irish side in 2008.

WHAT ADVICE WOULD YOU GIVE ANY GIRL OR WOMAN THINKING ABOUT TAKING UP RUGBY?
I would definitely recommend everybody to give it a go. It a sport through which you get to see loads, experience lots and make great GREAT friends.

Name: Helen Brosnan
HOW LONG HAVE YOU BEEN PLAYING RUGBY AND WHERE DID YOU START?
I started playing in UCC in 2000 played there for 4 years and then went to Highfield and from there Munster and Ireland.

WHY DID YOU DECIDE TO TAKE UP RUGBY?
UCC’s first ever ladies rugby team was being put together when I was in first year and i used it as a way to make friends and got hooked on the sport, I did not even know the rules when I started. I made great friends and became passionate about the sport.

DO YOU PLAY ANYOTHER SPORTS?
A little soccer, basketball in secondary school

WHAT IS YOUR GREATEST ACHIEVEMENT DURING YOUR RUGBY CAREER?
Wearing the green jersey, representing the country and singing the national anthem before a game.
Having 7 caps for Ireland and playing last 3 seasons with Munster and remaining unbeaten. Holding the Vice Captain position this year is a huge honour for me.

WHAT ADVICE WOULD YOU GIVE ANY GIRL OR LADY THINKING ABOUT TAKING UP RUGBY?
Great team sport, suits all types of player, give it a go and more often than not you will love it and wonder why didn’t you start sooner….. Everyone can be good at rugby, you learn so many skills through rugby that will help you through life. Very rewarding sport.