Highfield All Ireland U18 Success 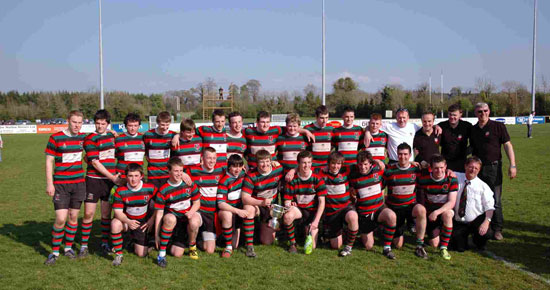 Highfield were crowned All-Ireland Under-18 champions for the first time on Sunday at Naas RFC, withstanding a determined comeback from reigning champions Wicklow in a thrilling encounter at Naas to win 24-22.

The final saw the large crowd treated to seven excellent tries and Highfield settled quickest despite a detemined Wicklow display in the opening minutes.
Wicklow piled on the early pressure and were camped on the Highfield line but luck was not on their side in the early stages.
Wicklow out-half Simon Breen returned from injury to play his first game in six weeks and while he bagged Wicklow’s third try, it was not to be his side’s day.
Breen came within inches of kicking the opening score for the reigning champions but one of his efforts came off the upright.
From one of Highfield’s first chances inside the Wicklow 22, the Cork outfit pounced for their first try with Lloyd Dorgan powering over the line after good handling by their backs.
With Brian O’Hea sending over the resulting conversion, Highfield broke into a 7-0 lead but there really was little to separate these sides.
Wicklow quickly responded thanks to the first of two Ben Doyle tries with the right winger bursting over the line to cut the gap to two points, with the conversion hitting the woodwork.
From then on, both sides had periods of dominance. Highfield hit back with a Paul Stack try under the posts and O’Hea slotted over the conversion.
Wicklow continued to press hard and their renewed efforts to take on the Highfield pack were rewarded when Charlie Butterworth touched down after he wormed his way past three Highfield players to grab his side’s second try, leaving the margin at 14-10 at the break.
In the second half, Wicklow bolstered their line-up with the introduction of Ireland Under-18 Clubs international Eddie Downes, Darragh Heraughty and Timmy O’Donovan also came in to take over the kicking duties.
However, Highfield continued to display great sharpness in possession, keeping the Wicklow defence under pressure.
Wicklow had a chance to narrow the gap but following a missed penalty, Highfield burst upfield with Jeremiah Cronin breaking through for a try and with O’Hea adding a conversion and penalty they burst into a 24-10 lead.
But Wicklow were not going to relinquish their crown easily and they staged a strong final quarter performance.
Highfield failed to score again as a determined Wicklow fought to the bitter end with Simon Breen slipping through for a try which O’Donovan converted.
Wicklow regained possession after being penalised for a knock-on with Butterworth popping the ball to Doyle for his second try, the gap was down to two points with time running out.
But the holders misfired in front of the posts once again as Highfield held out for an historic win.
Highfield manager Ger Stack expected a close encounter and was thrilled with his side’s display. "We had a very tough first 10 minutes but they weathered the storm and really got into the game," he said. "But having said that, Wicklow were a very good side and had won last year and we knew that team had won an Under-16 All-Ireland title as well so they were two good teams."
And Stack added that it was a special day in Highfield’s history to pull off this win.
"It’s a huge thing for the club to win this. We had a bus-load of supporters and loads more came by car with the President of the club and lots of former players and parents there.
"It was a huge bonus for the club, this has been one of the highlights for the club.
"We have a strong underage section and have had for years and this is a great recognition for the club with that good work going on for so long."
Wicklow coach Mick Higgins was high in his praise of his side’s gallant efforts. "To score four tries in an All-Ireland final and to be beaten is not a bad display," he said.
Highfield could also pick up more silverware when they take on Bandon in next Saturday’s South Munster Cup final at Musgrave Park (kick-off 7.30pm).
Scorers: Highfield: Tries: Lloyd Dorgan, Paul Stack, Jeremiah Cronin; Cons: Brian O’Hea 3; Pen: Brian O’Hea
Wicklow: Tries: Ben Doyle 2, Charlie Butterworth, Simon Breen; Con: Timmy O’Donovan
HIGHFIELD: James Sheehan; Lloyd Dorgan, Dan McSwiney, Paul Stack, Chris Lyons; Brian O’Hea, Kevin Foyle; James Cronin, Brian Feehily, Patrick Ryan, Jeremiah Cronin, Graham Coghlan, John McLoughlin, Marc Murphy, Kevin O’Byrne.
Replacement used: Richie Duggan for McLoughlin. Not used: Niall Kiely, Shane Duggan, Cian Mahony, Shaun O’Donovan, Sean O Donnobhain, Alan Spillett.
WICKLOW: David Acres; Ben Doyle, Gareth Kinnane, Ray Hurley, Ben Armstrong; Simon Breen, Denis Higgins; John Flood, Shaun O’Brien, Stephen Roberts, John Jenkinson. Niall Hardy, Liam Gaffney, John Campbell, Charlie Butterworth.
Replacements used: Eddie Downes for Flood, Darragh Heraughty for Campbell, Timmy O’Donovan for Roberts. Not used: Lorcan Cullen, Kyle Warren, Sean Doyle, Padraig Naughton; Killian O’Mahony, Jamie Clarke, Aaron Keogh, James Kilgannon, Shane Du Moulin, Roland Vilcuks.
Referee: Dave O’Brien (A.R.L.B.)