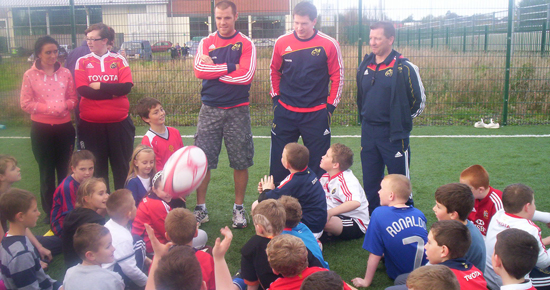 With three camps organised for the week it was a busy time for the Domestic Game department staff and overall a worthwhile experience for all involved and a great time to take advantage of the schools mid-term break.

First up at Thomond RFC, there were fifty kids in total ranging in age between 5 and 12. Jerry Flannery and Tony Buckley paid a surprise visit and were delighted to sign autographs and pose for photos with the young players. There was also a big turn out from the parents and coaches from Thomond RFC on the day and even though the weather was bad everyone had a great time.

On Wed 28th the Community Rugby Officers were in St Marys RFC for a mini rugby training camp. Thirty local kids turned up on what was a fantastic day both on and off the pitch and lots of parents and club coaches stayed on in the October sunshine to watch the proceedings.

The day brightened up even more when Barry Murphy and Ciaran O’Boyle turned up and took questions from the kids and signed autographs. The children also got plenty of photos with their Munster heros.

The third training camp of the week took place in Richmond RFC grounds in Canal Bank. There were twenty two kids in attendance on the day aged between 5 and 12 yrs. All the kids had great fun and were on their best behaviour and were a credit to the club. Their skills were very good and they played lots of fun games also on the day.

There was great excitement when Felix Jones and Eoghan Grace turned up to play some of the games and to answer questions and sign autographs.

Munster Rugby would like to thank Thomond RFC, St. Marys RFC and Richmond RFC for the use of their facilities and all the kids who participated, who were a credit to their parents and their respective clubs.

The Limerick Regeneration programme would also like to thank Jerry, Tony, Barry, Ciaran, Felix and Eoghan for giving their time and support during the week, and for making a lot of kids very happy.