Give Up Your Gear 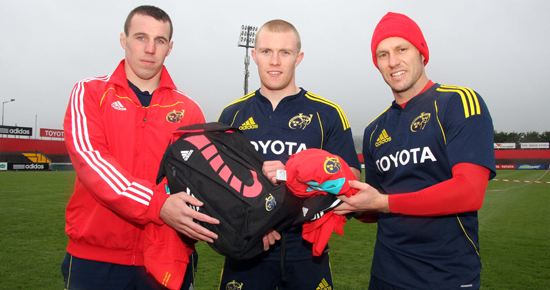 Munster Rugby has launched a new initiative, to run for the next three months, asking supporters, players, clubs and schools to donate any spare rugby gear (socks, togs, jerseys, boots) for use in developing rugby among children and teenagers by providing them with the basic requirements to take up the sport.

Two specific regions in Munster will be the initial beneficiaries of this scheme, the Limerick regeneration areas and the Knocknaheeny/Hollyhill area on the north side of Cork. These areas already have specific support from Community Rugby Officers, Ross Callaghan and George Guilfoyle (Limerick), and Frank O’Mahony (Cork).

Explaining the initiative Ross Callaghan said “The idea behind the project is to provide adequate boots and gear for children in regeneration areas thus removing the barrier they may face of not having the appropriate gear to take up rugby. We would ask people to bring old pairs of boots or gear in reasonable condition. This will be distributed to young rugby players in and around the regeneration areas in an effort to remove one of the barriers to kids playing sport.”

Munster Rugby will be setting up collection points at their first three matches after Christmas in Thomond Park and Musgrave Park:

Individuals will also be able to support the “GIVE UP YOUR GEAR” initiative through local schools and rugby clubs. Just drop in your kit and this will be collected by Munster Rugby Community officers and distributed to the clubs and schools in Cork and Limerick.

“This is a great way for people to support the development of the sport in these regions. In particular we are looking for boots and kit gear for young children between the ages of 6 and 16, however we will accept gear or boots of any size. This is a simple concept which will not cost any money. Just look in your cupboards and drawers and bring your old kit to the collection points. Your efforts will be appreciated."