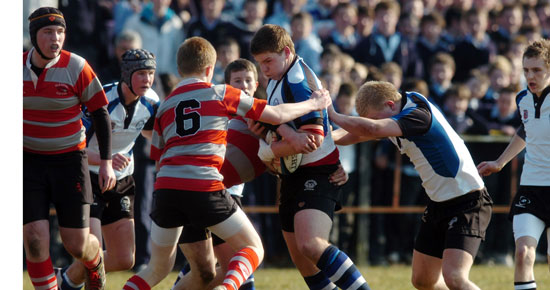 Fullback Greg O’Shea was one of many outstanding individuals on a Crescent side which qualified for the Avonmore Munster Schools Junior Cup final when they beat Glenstal Abbey in a hugely entertaining contest at a sun drenched Clifford Park.

Glenstal were on terms at 10-10 at the end of a first half that produced several flowing three quarter line moves by both sides.

Indeed the Crescent first try after only two minutes saw seven players involved before winger Jack Frawley got in at the corner. Flanker Diarmuid Dee landed a superb conversion and from then to the end Crescent never lost the lead.

Glenstal got on the board when Kevin O’Keeffe landed a penalty after five minutes.
Man of the match Greg O’Shea stretched the Crescent lead with a penalty but persistent Glenstal pressure was rewarded after seventeen minutes. Their outstanding number 8, Tom Ryan, picked up from the base of the scrum and barged his way over with O’Keeffe adding the conversion from close to the posts.

Another O’Shea penalty was followed by a try and conversion by the same player to have Crescent ten points clear. Glenstal suffered a big blow when Ryan had to retire injured after 41 minutes but after O’Keeffe landed a Glenstal penalty it sparked a tremendous last five minutes as they went in search of a converted try.

Jack Dineen was superb in an excellent back row with Diarmuid Dee and Jack Sheehan with Cormac Blake and Eoin Casserly giving them a line-out dominance while O’Shea was the star behind the scrum.