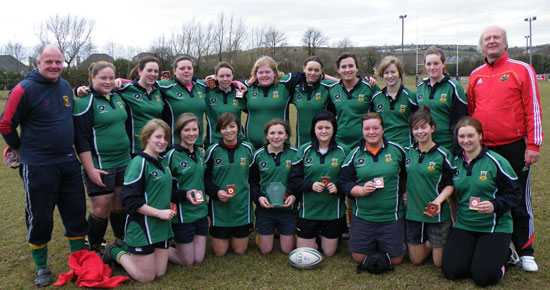 As the U19 season closed last week end, the U 17 finals are now being played out. The Mallow/Fermoy U17 team took on St Marys from Limerick in the U17 Development Cup in Ballincollig and came away with a great victory.

It is difficult to read how a game will go and this certainly was an unusual game. It was felt that the St marys/ Abbeyfeale side would be the stronger team as there were a number of new comers to the Mallow/Fermoy team. However the Mallow/ Fermoy started where they left off last week and blitzed the away team from the off. In the first fifteen minutes there was some unbelievable rugby being played, with the Mallow/ Fermoy team racing in for four tries and converting two.

The first to make the dash to the corner was captain, Jill O Donnell who just made the line and was tackled over the line, however she was able to turn and get the ball down. The second was even better when Brid O Sullivan raced down the left and her pace was enough to put her in under the posts for Julia Lane to convert.

The third was scored as usual by Aisling Glynn who scores every game she plays, her customary blind side dash was evident again and before anybody knew what was happening she was half way to the line. Again Aisling was tackled on the line but she had done enough to touch down. The fourth try was again scored by Captain Jill O Donnell who found the hole in the defence and raced away to score under the posts for Julia Lane to convert. The half time score was 24 points to nil. The score board at this point did not reflect the challenge that St Marys/Abbeyfeale were putting up to the Mallow/ Fermoy outfit. After that first fifteen minutes the Mallow /Fermoy team did not score again until the final few minutes. The St Marys/ Abbeyfeale side creped back into the game and even though they rarely got into the opposition twenty two they did make a game of it.

In the closing minutes Brid O Sullivan side stepped four players straight down the middle and touched down under the posts to leave Leah Lyons with a relatively easy kick to make the final score 31 points to nil.. This was an outstanding game by these seventeen players, there was only one player missing from this squad and it have to be said that all played a major part in this win.

The forwards were excellent where Leah Lyons and Adina Lyons were outstanding, sisters Clodagh and Maeve O Callaghan were everywhere and Melissa O Sullivan ran her heart out. Newcomers Kate O Riordan, Adele Hamlin and Laura Barry put in a great performance, Aisling Glynn at scrum half and Julia Lane at out half were a constant thorn to St Marys, they probed every angle, ran at the opposition and worried the St Marys back line all day. The centres of Maire O Connell and Brid O Sullivan were masters of the handling game and it is this area that we find the Player of the Day, which goes to Brid O Sullivan who ran everything and was a real worry to the St Marys team.
This win brings the total of three finals three wins and three trophies, with one final left to play against Shannon in the final of the league in Limerick, hopefully next Saturday at 11.00 in Coonagh..

Some promotion issues decided in AIB All Ireland League.