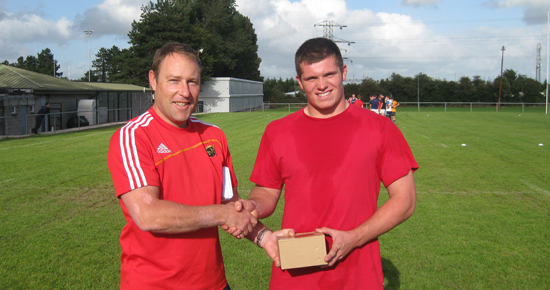 The Ireland Under-19 side take on Australia U19 Schools in their first fixture of the season in Cork IT on Wednesday under floodlights, ko 7.30pm.

Ireland Under 19’s are coached by Allen Clarke who is assisted by Colin McEntee and Jonathan Bell. The side will be captained by Blackrock’s Jordi Murphy.

Speaking ahead of the game, coach Allen Clarke said "The Under 19’s is an integral part of the National Representative Pathway. As a nation it is our first combined age grade side."

"The match against Australia provides a unique occasion to measure our young Irish talent against the best from the Southern Hemisphere whilst offering Irish Rugby the opportunity to benchmark the quality of our Elite Player Development Programs and the quality of this year’s group leading into next seasons Under 20’s Six Nations and Junior World Championship tournaments."

The Irish U19s includes Cork players David O’Mahony and Simon Hanbidge, while Paul Mullen and Kevin O’Byrne are named in the replacements. O’Mahony, Hanbidge and Mullen recently represented Munster U19s schools in the Interprovincial championships while O’Byrne was part of the U19s development squad.

Shannon’s Gareth Quinn McDonagh who featured for the Munster U20s in this year’s interpro is also named in the 22.