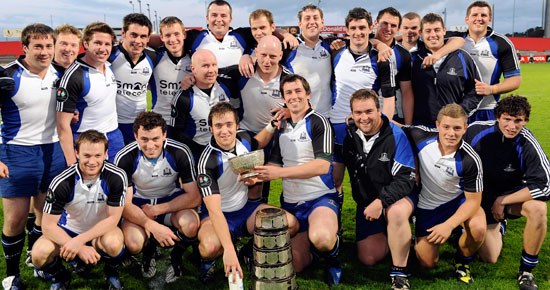 Cork Constitution won the Cork Charity Cup for the 38th time after they defeated Highfield in the final at Musgrave Park.

Playing into a strong wind in the opening half the Temple Hill side got off to a great start after three minutes when an initial break by full back Richard Lane was carried on by newcomer Cyprian Jouve and the former Tralee player sent Cronan Healy away to score.

Slowly Highfield got back into he game and in a ten minute spell before half time were very unlucky not to score when Diarmuid O’Sullivan, Paddy Ryan and Michael Cummins all went close to getting a try.

Con’ made sure of victory with two tries from out half Darragh Lyons early in the second half. A probing kick by Lane saw Highfield’s Joey Sheahan fail to clear and skipper Evan Ryan made the initial break to setup Lyons.

The out half’s second try came on fifty eight minutes when a break by Tim Duklow and Rogan Gee sent Lyons in and Lane converted for a 17-0.

Three minutes later a quick ball out the back line saw Michael Keyes score and Lane again converted. Lane extended their lead with a drop goal nine minutes from time.

Highfield never gave up and kept attacking the Con line and on seventy six minutes were rewarded when scrum half Cummins got in for a try to leave the final score Cork Constitution 27, Highfield 5.