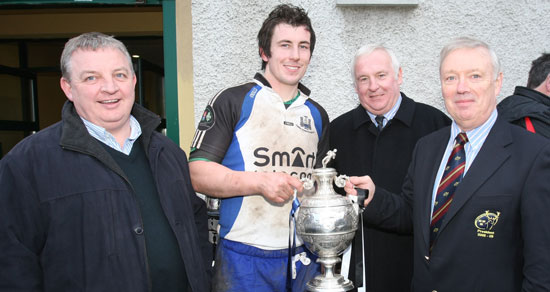 In perfect conditions in Clifford Park in front of a sizeable and vocal crowd, a spirited and determined Cork Constitution claimed their first Munster Senior Cup since 1989, claiming a 21-13 win over a valiant Old Crescent side in what proved to be an engaging and exiting ODM Munster Senior Cup Final.

It wasn’t long before Cork Constitution opened the scoring with a well worked try in the corner after just 50 seconds by centre Tom Gleeson, which wasn’t converted. However it did put Constitution in the driving seat early on although Manning did have the opportunity to put his side further ahead after six minutes with a drop goal attempt, however the kick didn’t find its mark. Old Crescent found their step however, and settled into the game, holding onto possession and keeping play well inside the Constitution half before a penalty brought Constitution back down the field. An infringement in the scrum allowed Richie Lane to stretch Constitution’s lead to 8-0 after 20 minutes, after Lane took over kicking duties from the injured Jeremy Manning. Ray Moloney had the chance to put Old Crescent on the scoreboard after 23 minutes with a penalty attempt however his attempt fell short. No mistake was made 4 minutes later with the Crescent outhalf Mark Woods claiming their first three points from a penalty kick. Crescent’s persistence paid off with a well worked try after 31 minutes by hooker Pat Humphries, converted by Mark Woods to put Crescent 10-8 ahead as the first half counted down. Old Crescent suffered a blow in the last play of the half when No. 8 Juan Pablo Ruiz was sent to the bin, allowing Constitution to reclaim the lead with a Richie Lane converted penalty. The half time score stood 11-10 in Constitution’s favour.

Both teams came out fighting in the second half, but it was Crescent who made most ground early on, and were rewarded with a 49th minute penalty kicked by Woods to edge them ahead once more. After 56 minutes however a try from Constitution winger Cronan Healy converted by Lane put Constitution 18-13 ahead. With little advantage being gained in the dogged battle in the middle of pitch, both teams sought to gain yards with piercing kicks to the corners throughout the second half, with penalties awarded proving the difference between the sides. Constitution stretched their lead after 67 minutes with Lane again on target with a penalty kick to put the Cork side 21-13 ahead. Crescent rallied however and continued to push towards the Constitution line. Crescent had a chance to reduce the deficit after 71 minutes kicked by Woods went left of the posts, however it did signal a resurgence by the Limerick side who continued to test the Constitution defence in the last quarter. However, Constitution held on for the victory, their 22nd Senior Cup title.

Standing out for Constitution included Cronan Healy on the wing whose work rate was tireless, with Anthony Horgan also being hugely influential for the Cork side. Aaron Carroll on the wing stood out for Crescent, with his second half kicks for touches showing plenty of class. As Cup finals go, it certainly didn’t disappoint, with both sides showing tremendous grit and determination right down to the final whistle. Munster Branch President Nicholas Comyn presented the Munster Senior Cup to Constitution Captain Brendan Cuttriss, with Niall O’Driscoll of ODM Accountants in Bandon presenting the medals.

Crescent and Constitution Do Battle for ODM Munster Senior Cup