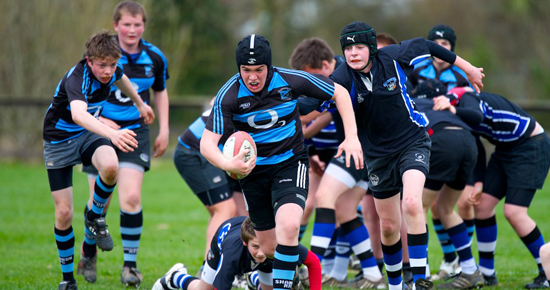 Next Thursdat night, 29th at 7.00pm in The Celtic Ross Hotel, Clonakilty’s flying winger Noel O’Sullivan will receive "The West Cork Sports Star of the Month" Award to mark his amazing try-scoring career in senior rugby. Sully scored his 57th try earlier this season which saw him overtake legendary Ireland, Leinster and St. Mary’s winger John McWeeney and Munster and Shannon’s Johnny Lacey as the AIL’s top try scorer of all time. O’Sullivan has played 126 times for Clonakilty in The AIB All Ireland League and has been a key component in the West Cork club’s success both at Junior and senior levels. He has been an ever present member of the first team for over thirteen years and shows no sign of letting up now. All who have played and been entertained by Sully over the years are invited to attend.

The J2s threw away a 10-3 lead to go down to Bandon in the Munster Junior Plate Semi-Final in The Vale last Sunday. Outscoring the visitors by two trys to one, and seemingly home and dry, they allowed a gritty Bandon to snatch it at the death. It has been a very good year for the development side and they still have a chance of silverware this season when they take on Cork Constitution in Musgrave Park this Friday night, the 23rd, at 7.00pm in The Mick Barry Cup Final.

This Thursday night, the 22nd, the Under 15s will also contest a final when they travel to Dunmanway to contest The West Cork Cup with Bandon at 6.30pm. A wonderful win against Muskerry last Wednesday in Inniscarra booked their place. They too have had a wonderful season and supporters will be able to pick out many of the future senior players for Clon from the line up.

A touch of nostalgia will return on Monday, the 26th, when the Under 15s again contest another final in Musgrave Park at 6.30pm. Another away victory this time at the expense of Kanturk last Sunday set them up for this South Munster league final. It is a few years now since the heady days when the casual observer could be forgiven for believing that Musgrave Park was home to Clonakilty such was the frequency at this time of year of the Red & Green jerseys contesting finals particularly at under age. Old rivals Highfield will provide the opposition and the travelling faithful will relish the prospect of this group rolling back the years.

Lotto Lolly
The club Lotto continues to build and this Saturday the Jackpot will be €;4,900. Last Saturday’s drawn numbers were 16, 17, 26 and 29 and there were no winners. The Lucky Dip winners were Derek Lawless, Cliona Moynihan, Oisin Devoy, Ted Carthy and Tim Dorgan

Limerick Fire Brigade has assembled an all star dream team of rugby talent, including Mick Galway, Anthony Foley, and Ger Earls to appear in a charity rugby match to kick off the national collection day in aid of Special Olympics. The Fire Brigade All Stars will take on the Limerick Leprechauns in Garryowen, Dooradoyle, at 7pm on Thursday 22nd of April, and the team will also include fire service members . "It’s all in the name of charity for Special Olympics Ireland and the fire service jumped at the chance to help out this fantastic cause" said fire service event co ordinate Paul Knapp and this exhibition match is free for all to attend.

During the match interval an attempt will be made to set a World Record for the largest rugby scrum. Two packs of forwards, including several Munster and Ireland players, will consolidate Limerick’s reputation as the home of Rugby.
The rugby scrum organiser Eugene Falconer has been involved with Special Olympics since 2003 when he was part of the Event Services Management team for the World Games. Eugene, who has also served as Chief Steward for other Special Olympics World Record attempts says "We aim to provide sports fans with an exciting event that will whet their appetite for the Special Olympic Ireland Games which are taking place in Limerick this June."

Limerick Leprechauns celebrate 25 years this year having raised over a million euro for various charities through their charity rugby matches. The Leprechauns team include local rugby legends, Peter Clohessy, Len Dineen, Gerry Mc Laughlin and Sonny Kiely and they proudly claim to have never lost a match. Limerick Leprechauns President Diarmuid Herbert adds "This will be a wonderful family occasion combining all the best Limerick sporting tradition has to offer. We are delighted to help with the fundraising efforts for Special Olympics Games and would encourage every rugby fan to come and cheer on their favourite teams on Thursday night"

This event which will also include a barbecue and entertainment is the first of several fundraising activities which are taking place in Limerick this weekend, as part of the National Collection day on 23rd April.
2010 is a very significant year for Special Olympics Ireland with the 2010 Ireland Games taking place in Limerick this year. 1,900 athletes from all over Ireland will travel to Limerick from 9th – 13th June to compete in the 4 day residential games, accompanied by 650 coaches and 4,000 family members. The athletes will participate in a range of sports, including aquatics, athletics, badminton, basketball, bocce, football, golf, gymnastics, tennis, pitch and putt and kayaking.
For more information go to www.specialolympics.ie

It’s a sure sign of that the spring is here; underage finals played in the long evenings, on a firm pitch that more often than not yields excellent rugby.

On Thursday night last in Coonagh, the U/14’s of Shannon and Old Crescent played out a league final with more than its fair share of thrills along with some superb rugby from both sides. Right up to the final whistle either side could have won this final, but as Old Crescent tried valiantly to claw back the 17-10 deficit, Shannon defended the gain line with such authority, organisation and passion that one feels that the Munster team would have difficulty in breeching.

Whilst Old Crescent can be very proud of their supreme efforts in a game that saw little between the sides, it was Shannon’s evening and their victory was thoroughly deserved.

A blistering start from Shannon saw Captain Shane Fenton lead the attack and score his side’s early 10 point tally. First came a penalty and then with the early momentum in his sides favour, Fenton burst over the try line for a converted try.

It was a start that Shannon could scarcely have imagined, but any illusions of a facile victory were soon dismissed as Old Crescent soon displayed all the traits that ensured their final spot. Not only did they claw their way back into contention, they were doing so with some gusto and Shannon had to be very vigilant for the remainder of the half. A deserved converted try for Old Crescent brought them to within one score of Shannon at the break and such was the confidence on show, it appeared as if the second half would see them take the lead. However, Shannon had plenty in reserve and a visible increase in their pace at the start of the second half ensured Old Crescents momentum was negated.

Up front, Shannon began to dominate the loose exchanges with Kelvin Brown and Mike Mc Gann to the fore, but Old Crescents stubborn resistance saw scoring opportunities few and far between. But at some stage the resistance would inevitably fail in the face of heavy fire and the impressive No.6 Kelvin Brown barged over for another Shannon try converted by Shane Fenton.
Old Crescent were far from finished and a penalty soon after ensured that the final period of the game would be played with supreme effort from both sides.

Old Crescent held advantage in the possession stakes, but Shannon held the upper hand in defence, but it was a defence that was severely tested. At one stage, as the drama unfolded Crescent looked odds on to get the outside line, but a superb Robbie Graham tackle, one of many, saw the danger averted.

Almost 5 minutes into injury time the referee blew for full time and celebrations could begin in earnest for Shannon while for Old Crescent it may be of little consolation that they played a fulsome part in a thrilling game.
The standard of rugby throughout was exceptional and both sides and coaches should take full credit.

Follow the link for pictures of the game courtesy of John Humphreys. http://gallery.me.com/jfhumphreys#100700