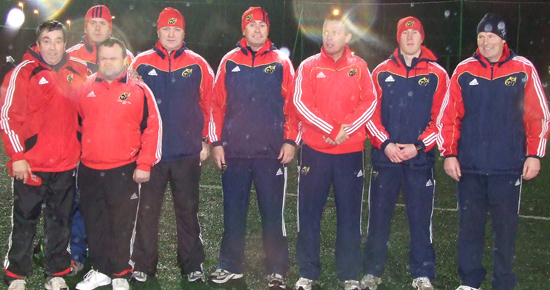 The Munster Junior Interprovincial side get their campaign underway this weekend when they travel to Dublin to play Leinster at Seaview rugby grounds.

The weather which caused chaos to the fixture program in December and January has not helped with the preparations of the Munster side and it has only being in the last four weeks that Coach Ian Dunne has been able to assemble a panel.

Munster Junior League champions Richmond do not have any players in the squad as it was decided not to use them because of their involvement in the All Ireland club Interprovincial championship in the last few weeks.

They have trimmed down their panel to twenty nine and they hope that all of this panel will see action over the coming three weeks when following Saturday’s game they play Ulster at Abbeyfeale and finish their championship with a game against Connacht on Saturday 9th May at Ballincollig.

The team picked to play Leinster is a young side with an average age of twenty four and includes nine new caps.