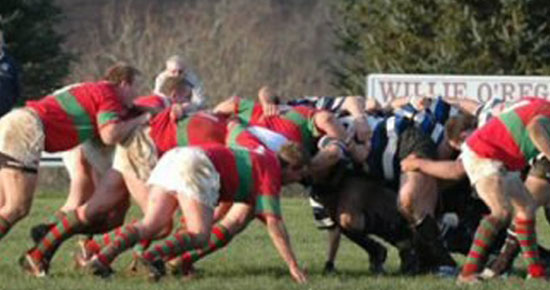 Clonakilty Rugby Club will hold their Annual General Meeting in the The Vale clubhouse at 8.00pm on Friday 28th May.

This meeting will elect the officers and committee for season 2010 – 2011, an historic tenth season in the All Ireland League senior ranks. It will also be the fifth season in the second division and with the league structure expected to change in season 2012 – 2013 it will be important for Clon to build to take advantages of the expected changes.

Never short on ambition the club will be looking to progress to higher levels and the confirmation that Coach David O’Mahony has committed to staying with the club for the coming season will be greeted with enthusiasm. He will unveil his new coaching/management team soon so watch this space.

Teams currently in division two looking to the top echelon need to finish in the top two positions in the coming season or failing this to at least retain their division two status and then finish in the top four the following season. Either would see them into division 1B. The IRFU have had extensive consultation with all the stake holders and are expected to make changes accordingly. This new “camel” league in theory will become two divisions in 2012 – 2013 with each division broken into two sections as division one at present. In practice I believe it will be seen and accepted in a short time as four divisions again. The top two divisions will comprise of ten clubs in each and the other two will have sixteen in each.

Clon had a roller-coaster season last year at senior level looking likely relegation candidates for a while and then turning it around to being possible top four candidates before settling comfortably in the safety zone with games to spare. However across the club it was a successful season with no less than five trophies taken to The Vale.

At underage in particular, there is great hope as there are players already exhibiting the skills and qualities to become senior players in the future. An excellent range of coaches and mentors are providing the facility and expertise to develop these youngsters to their potential and the current crop is the most exciting in the club for some years. All current and intending members of the club are urged to attend the AGM to create and sustain the momentum for the future.

Its that time of year again. If it’s summer then it must be Tag time! The social rugby phenomenon is the world’s fastest growing sport – particularly the mixed variety. Although a social outlet, creating new friendships…and indeed romances…it also appeals to those who seek a fun way of maintaining fitness. Open to both sexes and all ages it provides an activity which is different to the established pursuits and beneficial in so many ways. Apart from the physical benefits it also provides a network of friends which is invaluable particularly for those who have moved to the West Cork area in recent times. The West Cork Mixed Tag Rugby League will kick off their second season with registration in Clonakilty RFC on Thursday 27th May at 6.30pm and will continue for eight weeks through June and July, (pitch time 7.00pm), culminating in a gala barbecue and prize giving.

There will be an introduction to this non-contact version of the rugby game prior to the first round of matches on the night. The number of players in team squads is unlimited but only 15 may present for any one match and only seven of these may be on the pitch at anytime and at least three of these must be female. The tournament will be attractive to business houses, clubs and organisations but individuals with no connections can register and the organisers will put them in squads with other unaffiliated players. For Posters, registration forms, rules and other relevant information please call to BK Footwear, Scannells Bar, De Barras or The Wrastler, call Conor on 0860247060 or email loosehead@eircom.net. All the above will be available on the night as will Tag gear so don’t miss this opportunity to be in at the beginning.

The club lotto continues to build and, as there were no winners last Saturday, this Saturday, in Scannells Bar at 9.00pm, punters will be playing for a €;5,300.00 Jackpot. Numbers drawn last Saturday were 2,6,10 and 17. Lucky Dip winners were Dean Lee, Peggy Knowles, Jacinta O’Donovan, Paddy Coughlan and Flouic Chimenfs.