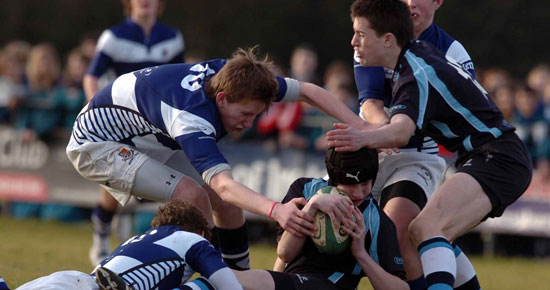 Castletroy College pulled off a dramatic win in the opening round of the Avonmore Milk Schools Junior Cup as both Crescent College Comp and C.B.C. also record wins.

Castletroy College 11, Rockwell 10.
A great come back by Castletroy in the second half saw the Limerick side come from 10-3 down at half time to snatch victory with a last minute penalty.

Rockwell dominated the opening half despite going 3-0 behind after twelve minutes with a penalty from JJ McDonald.
A try by David Johnson which Coleman Kennedy converted put Rockwell ahead after twenty five minutes and in first half injury time Kennedy added a penalty for Rockwell.

Conor Burns brought Castletroy back into the game with a try on fifty five minutes.

Referee Derek Noonan had to retire injured and was replaced by one of his touch judges.

Entering the final stages McDonald converted a penalty for Castletroy to book them a quarter final tie against the losers of the Ard Scoil Ris v St. Munchin’s tie.

Crescent College Comp. 15, P.B.C. 10.
Crescent College Comp were deserving winners of this tie against the holders P.B.C. at Dooradoyle.
In an evenly contested first half which saw both sides putting in the tackles when it mattered Crescent led 3-0 at half time with a penalty by Dermot Dee after three minutes.

Tommy Duggan levelled for Pres’ with a penalty four minutes into the second half but Crescent than hit a purple patch shortly after.

A well constructed try on fifty minutes saw David Culhane touch down and Greg O’Shea converted. A great maul up field by the Crescent pack finished with Greg Barry touching down in the corner for a 15-3 lead.

A late rally by Pres’ saw a chip ahead by Duggan being gathered by Gavin O’Callaghan who touched down and Duggan converted.

Glenstal Abbey 10, C.B.C. 22.
Christians were made work hard for this victory over Glenstal at Clanwilliam Park and only a last minute try by Adam Finn made certain of victory for the Cork side.

Foley levelled the scores with a penalty and the scrum half put his side ahead with a try.

Christians had to wait until the final minute to be certain of victory when a great run up the wing by Adam Finn saw him touch down and Foley converted.

Christians will now face arch rivals P.B.C in the quarter finals in three weeks time, while Glenstal will face the winners of Ard Scoil Ris or St. Munchin’s.