All Ireland U17 Title for Waterpark RFC 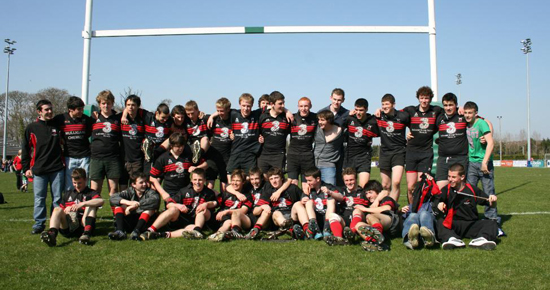 The young Waterpark side were crowned All Ireland U17 Winners in Naas RFC on Saturday after defeating Enniscorthy 23-10.

Waterpark captain Tom Kiersey proudly lifted the Under 17 I.R.F.U All Ireland Trophy after his side emerged victorious against a gallant Enniscorthy side, who despite their best efforts, were unable to stop the Waterford club.

Enniscorthy won the toss and elected to play with the breeze and sun at their backs and within a minute had three points on the board when their out-half Brendan Kearney kicked a drop goal.

Waterpark responded with two penalties from Tom Kiersey and the Wexford side went ahead once again after a Dermot Breen try.

But this was to be the last of the Enniscorthy scores as Waterpark hit back almost immediately with two tries before the half from Kalani Moore and Damien O’Dwyer giving them an 18-10 lead going in at the break.

On the resumption Waterpark added a third and final try with hooker Darren Coady blasting his way over the line.

The Waterpark youths had done enough and were on their way to claim the spoils after a great season where they also claimed East Munster and Munster honours before capturing the All Ireland title on Satuday April 17th.