All Ireland Title For UCC U21s 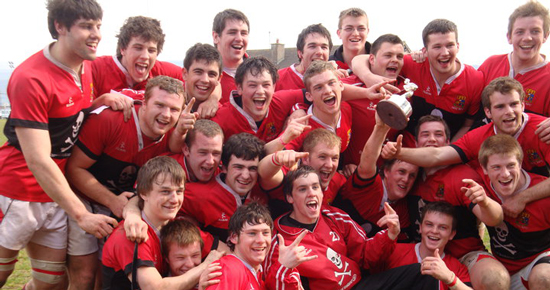 U.C.C. regained the Frazer McMullen All Ireland Under 21 trophy at the weekend with a 16-10 win over Lansdowne at Clonmel.

After almost 9 minutes of injury time with UCC under pressure and camped in their own 22 for that period, Johnny Holland’s kick to touch brought the College its fifth All Ireland win in this grade (1997, 2002, 2004, 2007, 2010) and that was really what the lads deserved after a very brave performance.

Lansdowne were gifted a soft try after just two minutes and while UCC responded via an Andrew Burke penalty, College were rocked within minutes when Lansdowne ran the length of the field from a UCC intercept pass to score in the corner to lead 10-3. As the half progressed, College were visibly getting to grips with their opponents and were rewarded with another Burke penalty on the stroke of half-time.

There was a turning point very early in the second half when Gavin Nugent stopped a certain 7 pointer by intercepting a pass.

UCC’s pack were now dominant and were rewarded with Burkes 3rd penalty of the day to leave it 10-9 to the Dublin side with 50 minutes on the clock. College continued to press in the Lansdowne half and got the all important break through in the 62nd minute when Burke went under the post following great driving from the pack. This made it 16-10 to UCC. No one present would have thought that there would have been no further scores in the game.

UCC were aware that there was going to be a substantial amount of injury time following two injuries to outstanding number 8 James Ryan (the second which saw him substituted), but the 9 minutes that followed were far more than UCC had hoped for.

They defended in that period deep in their own 22 as if their lives depended on it, and while Lansdowne came close to spoiling the party on a number of occasions, defeat was never going to be UCC’s lot on the day.

A fifth All Ireland U21 title for UCC in this competitions 15 year history marks a unique achievement. Some other names to have won an All Ireland U20 title with UCC include: Ronan O’Gara, Peter Stringer, Jerry Flannery, Denis Leamy, Donnacha Ryan, Denis Hurley, Stephen Keogh, Frank Murphy (Connacht), Tim Ryan (Toulon) to name a few.

Road to the final: UCC finished third in the divisional south league to give them an away quarter final tie against UCD in Belfield, winning 15-14. They then met Shannon in the semi final in Coonagh where UCC won 26-15.