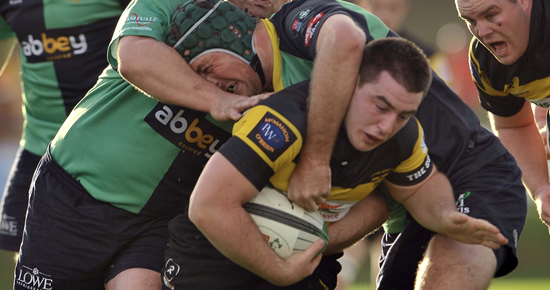 Dolphin lost their unbeaten record when they went down 19-10 away to St. Mary’s College at Templeville Road. All the scores came in the opening half with a try from Barry O’Mahony and a conversion and penalty by Barry Keeshan being the Cork side’s scorers.

Cork Constitution moved back into a challenging position with a 17-13 victory over Garryowen at Temple Hill. Ronan O’Mahony opened the scoring for the visitors with a try which Conor Murray converted.
Scott Deasy and Murray exchanged penalties before Richard Lane drew the home side level before half time with a try which Deasy converted.
A great break by Deasy from inside his own half saw the centre run sixty metres to score under the posts and he also converted. Garryowen’s only reply was a penalty by Gerry Hurley.

In Division 1B Young Munster moved into second place after they collected maximum points from their trip to Ballynahinch after their 33-5 win over the Co. Down side. Clem Casey, Neville Melbourne, Derek Corcoran and Aaron Carroll were try scorers for the visitors. Matthew Costelloe kicked two conversions and a penalty. Mike Prendergast completed the scoring with two drop goals.

A stunning display by the U.C.C. pack laid the foundation for the students 20-3 win over Dungannon at the Mardyke. James Ryan and Shane O’Sullivan scored tries for the students and Andrew Burke kicked two conversions and two penalties.

Thomond remain in second place in the Second Division after they had to come from behind to share the spoils with Highfield at Fitzgerald Park after the sides played out a 26-26 draw. Daragh O’Neill and Warren Kelly scored tries for the home side and Declan Cusack kicked four penalties and two conversions. Michael Knowles and David Kelly scored tries for the visitors and Colin Mahony kicked two conversions and four penalties.

Bruff kept up their promotion challenge with a 24-12 home win over U.C.D. at Kilballyowen Park. Gary Leonard, Nigel Riordan and Patrick Thompson were try scorers for the home side and Brian Cahill kicked a penalty and three conversions.

Three second half penalties from Kurt Mortagh saw Clonakilty come from 6-0 down at half time to beat Trinity 9-6 at the Vale.

Old Crescent now occupy the bottom place in the Second Division after their 36-15 defeat away to Corinthians. Marcus O’Connell and Mark Ryan scored tries for the Limerick side and Brian O’Shea kicked a penalty and a conversion.

Midleton are tops of the Third Division following their 43-11 home win over bottom side Co. Carlow. The East Cork side had the bonus point in the bag by half time. Jeff Hitchmough, Peter Broughton, Kevin Brierley, David Lee, Junior Sifa, and David Smyth scored tries for the East Cork side. Hitchmough kicked five conversions and Broughton added a penalty.

Nenagh Ormond lost ground in their challenge for promotion when they played out a 16-16 draw away to Barnhall. Michael Kennedy scored a try for the Tipperary side and David Delaney kicked a conversion and three penalties.

Sunday’s Well eased their relegation worries with a 25-10 win over Ards at Musgrave Park. Francis Moynihan and Chris Long scored tries for the home side and Eamon Ronan kicked five penalties.