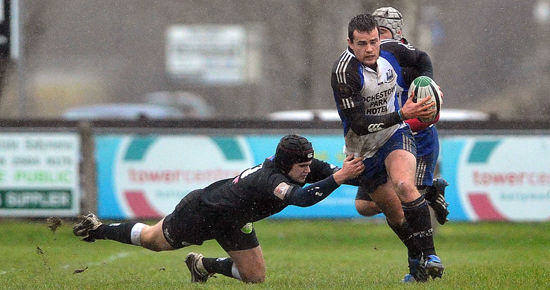 Cork Constitution and Young Munster have moved into pole position in their respective sections of Division 1A and 1B of the AIB All Ireland League.

A penalty miss in the final minute of the game from in font of the posts on the Twenty Two by Blackrock College’s Ian Madigan denied his side a share of the spoils at Temple Hill as Cork Constitution ran out 18-15 winners.
The home side trailed 12-10 at half time with Mick Carroll and Shane Monahan scoring tries for the Stradbrook side and Madigan kicking a conversion. Richard Lane was Con’s try scorer and Scott Deasy added a conversion and penalty.
Lane put Con in front with a second try a minute into the second half and Deasy extended the home side’s advantage with a penalty.
Madigan kept Blackrock in touch with a penalty fifteen minutes from time until his dramatic miss in the final minute meant that his side only went home with a bonus point.

Leaders St. Mary’s College lost top spot, when they were defeated by Garryowen 16-14 at Templeville Road.
Garryowen led 16-3 at the break with a try from Paul Neville and a conversion and three penalties by Conor Murray. The Dublin side fought back to close the gap to two points and Gavin Dunne missed a last minute penalty to give the home side the points.

Defending champions Shannon picked up maximum points with a 32-10 win over Dolphin at Coonagh.
Munster and Irish star Marcus Horan made a return to competitive action when he played the full 80 minutes for the winners.
Dolphin went in front with a try by prop Aidan Foley midway in the first half but penalties by Tadgh Bennett in the 23rd and 40th minutes had the Limerick side in front at the break. A try by Denis McCarthy five minutes into the second half edged Dolphin back in front.
Shannon responded in superb style and Eoghan Grace was rewarded when he scored tries after 59 and 64 minutes and in between Fergal Walsh had a try.
Stephen Kelly had Shannon’s first try after 49 minutes and from that point onwards it was a matter of working for the bonus point which came with Grace’s second try.
Tadhg Bennett converted three of the four tries.

U.L. Bohemian are now in bottom place after their 21-12 defeat by Clontarf at Castle Avenue.
Michael Keating and Henry Bryce scored first half tries for Clontarf which Mark Dufficy converted for a 14-0 half time lead. Keating scored a second try and Dufficy converted. Kieran Essex replied with two tries for the Limerick side and Dan Kelly converted.

A last minute penalty by Alan Kingsley earned Young Munster a dramatic 16-15 victory over Old Belvedere at Anglesea Road to move them ahead of the Dublin side and top of Division 1B.
The Limerick side led 13-10 at half time with a try by Matt Costello and a conversion and two penalties from Kingsley. Dave Mongan looked like he had won the points for Belvo’ with a try eight minutes from time, but Kingsley’s third penalty saw the Dublin side lose pole position.

U.C.C. kept up their challenge with a 19-13 win over Galwegians at the Mardyke which was also the students Colours Game. They trailed 6-5 at half time, but two tries from Sean Scanlon and one by skipper Ivan Dineen and two conversions by Brian Derham saw the students put a big dent in the Westerners hopes of promotion.

The big game in the Second Division ended all square when Thomond and Bruff played out a 6-6 draw at Fitzgerald Park. This result leaves Bruff in fifth position a point behind second placed DLSP.

Old Crescent eased their relegation worries with a 34-27 win over Trinity. Shane Spring scored two tries for the Limerick side and Philip Glamuzina one. Mark Woods kicked five penalties and two conversions.

Clonakilty’s 12-6 defeat by Greystones at Dr. Hickey Park means that the West Cork are now level on points with the County Wicklow side at the foot of the table.

Midleton collected maximum points from their trip to Merrion Road where they defeated Wanderers 38-8 to remain unbeaten at the top of the Third Division.

Sunday’s Well who had to transfer their game with Banbridge from the main pitch in Musgrave Park to the back pitch went down 7-6. The Well led 6-0 at half time with two penalties from Eamon Ronan, but a try by Simon McKinstry which Neville Farr converted eight minutes from time secured the points for the County Down side.