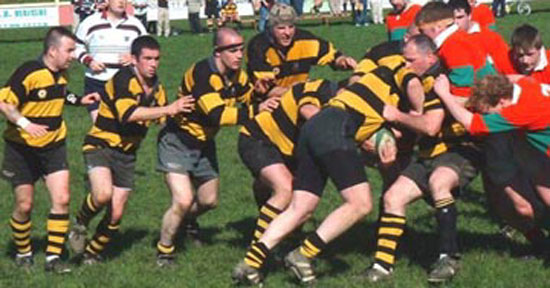 It was back to the playing fields for many sides as only two junior games had to be postponed due to the weather.

In the three Second round ties of the Munster Junior Cup, victory went to the Cork sides. Old Christians the only side drawn away defeated Newport 30-17. Brendan Culloty, Paul McGrath, Alan O’Connell and Peter Twomey were try scorers for the Cork side and Aidan Tobin kicked two conversions and two penalties.

Home advantage helped Kanturk to a 20-3 victory over Newcastle West. Simon Mulholland and Danny O’Sullivan scored tries for the winners. Dara Meade kicked two penalties and two conversions, while Sean Neville replied with a penalty for the West Limerick side.

Two of the eleven First Round ties did not go ahead. Shandon v Mallow was postponed while Castleisland received a walk over from Presentation.

The four AIL clubs playing Junior sides who had the advantage of a home tie all advanced. Clonakilty defeated Charleville 22-10. Liam Cahill, James O’Driscoll and Jonathan Toft all scored tries for Clonakilty and Ciaran Calnan kicked two conversions and a penalty. Mattie O’Neill scored a try for the visitors and Frankie Holly added a conversion and penalty.

Thomond had the biggest win of the day when they saw off the challenge of Fermoy 36-13. Fernado Gallant scored three of their six tries with Brendan Grant, Barry Twoomey and Frankie Daly being their other try scorers. David Guerin converted three of the tries. Cathal O’Keeffe kicked two penalties for the visitors and also converted a penalty try.

A superb second half display by Sunday’s Well saw them overcome Abbeyfeale 30-8 at Musgrave Park. The sides were level 8-8 at half time. Rob Browne opened the scoring with a try for Abbeyfeale, but a penalty by Danny O’Shea and a try by Rob Kent put the home side in front. David Collins levelled the scores with a penalty.
It was all the ‘Well in the second half and they had tries from Ian O’Driscoll, John Moynihan and Colin Corkery with O’Shea kicked two conversions and a penalty.

Old Crescent defeated Killorglin at Rosbrien on a 32-20 scoreline.

Midleton came form 8-0 down at half time to defeat Nenagh Ormond 14-8 at the Towns Park with tries from Eddie Tobin and Charlie Kavanagh both converted by Dave Hurley.

Corca Dhuibhne made a winning debut in the competition with a 26-22 home win over Kilrush. Johnny Curran contributed two tries, three penalties and a conversion to his side’s tally while Ciaran Collins also got in for a try.

A try by Alan Mulligan, a Paul O’Sullivan drop goal and a conversion and two penalties by Sean Hickey helped Killarney to a 16-6 away win over Douglas. Andy Larkin kicked two penalties for the home side

Micky Cronin proved to be Carrick-on-Suir’s hero as they defeated Dungarvan 19-3. He scored a try, conversion and four penalties. Michael Irwin replied with a penalty for the home side.

Two tries by Robert Green both converted by Barry Gibbons gave Scariff a 14-8 half time lead in their tie with Waterford City, but the visitors ran out comfortable winners with a 30-14 victory. John Doran, Gary Keane, Mick Costello and Karl Reid all scored tries for the winners and Aaron Foskin kicked two conversions and two penalties.

It as you were in the First Division of the Munster Junior League with all the three top sides winning.

Richmond remain in second place after their 26-8 home win over Crosshaven. Finbar Hogan, Garoid Phelan, Moss O’Connor all scored tries for the Limerick side; O’Connor added a drop goal and Wayne Murphy kicked two penalties and a conversion. Michael Buckley replied with a try for Crosshaven and Ger Fitzgerald kicked a penalty.

Cashel kept their challenge alive with an 8-3 away win over Clonmel. Pat O’Connor put Cashel ahead with a penalty after twenty two minutes but Morgan Lyons had the sides level four minutes later with a penalty. Kieran Murphy restored Cashel’s lead with a try on twenty eight minutes.

Tries by Eoin McCoitir and Robert O’Donovan and a penalty and two conversions by Brendan Ronan gave Cobh Pirates a 17-0 interval lead at home to Skibbereen. The visitors replied with a try by John O’Sullivan and two penalties by Mark Kingston made the final score 17-11 in Cobh’s favour.

Thurles eased their relegation worries with a 27-20 win over St. Senan’s and collected maximum points. Dara Duggan scored two tries and a penalty for the Tipperary side, Barry Dwyer, Richie O’Gorman got a try each and Eamon Connolly converted two the tries. The Clare side had tries from Ger Hall, Darren Guerin and a penalty try and Declan Collins kicked a conversion and penalty.

Galbally still remain unbeaten in the Second Division after they shared the spoils with Clanwilliam when they played a 3-3 draw and have now moved top of the table a point ahead of Old Christians and Clanwilliam. A penalty from Karl Bourke gave the County Limerick side a 3-0 interval lead but a late penalty by Willie Ryan earned Clanwilliam a draw.

There were victories for Bruff and U.L. Bohemian in the North Munster Seconds League. Bruff defeated Garryowen 22-7, while U.L. Bohes were 11-3 winners over Young Munster.

Cobh Pirates made sure of their place in the second round of the South Munster Junior Two League with a 34-19 victory over Dolphin. Eoin Ryan, James Murphy, Dave Mulcahy, Stephen O’Neill and Gary Price scored tries for the winners and Matt Morehan kicked three conversions and a penalty.

Dolphin made a great start to their group in the second phase of the Junior Three League South with a 34-5 win over U.C.C. Brian Kelleher, Martin Aherne, Micky Waters, Cillian Walsh and Neill Potts all scored tries for the winners. Dan O’Sullivan kicked two conversions and Aherne one. Tim Stone was the students try scorer.