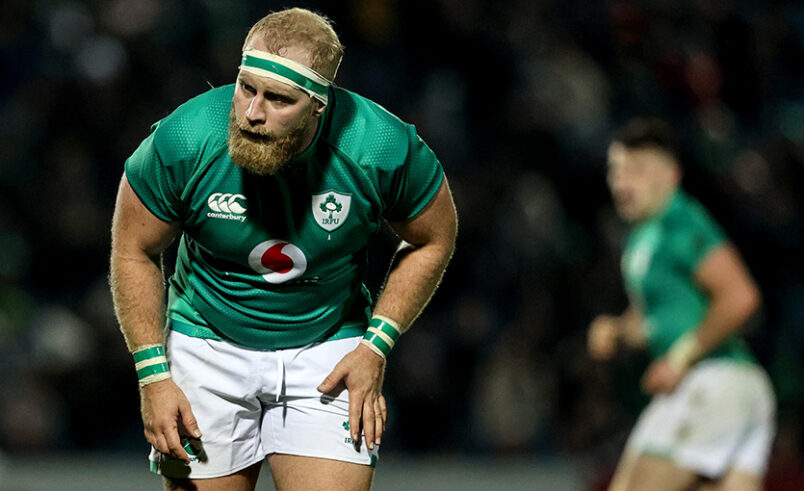 Jeremy Loughman will make his Ireland debut on Saturday ©INPHO

The Ireland coaching group have named Tadhg Furlong to captain Ireland as they take on Fiji at the Aviva Stadium in the Bank of Ireland Nations Series on Saturday afternoon (Kick-off 1pm, live on Virgin Media and Amazon Prime).

Furlong is the 109th player to captain Ireland as he makes his 62nd Test appearance in green. While Furlong is not the first prop to captain his country, the last one to do so was Simon Best against Argentina in 2007.

Johnny Sexton first captained Ireland against Russia at RWC19 in Japan and was then made permanent captain following Andy Farrell‘s appointment as Ireland head coach and Rory Best’s retirement.

Since taking over as Head Coach, Farrell has facilitated opportunities for the leadership group to wear the captain’s armband with James Ryan first captaining the side against England in 2020 and on three other subsequent occasions, while Iain Henderson led the group against France in 2021.

There are five players in the starting side to face Fiji that started games against the Māori All Blacks during the Summer Tour of New Zealand – Jimmy O’Brien, Stuart McCloskey, Jeremy Loughman, Kieran Treadwell and Nick Timoney.

Tom O’Toole, Cian Prendergast and Craig Casey, who are amongst the replacements for Saturday’s game, also started matches in the Māori Series.

There are three uncapped players in the Match Day Squad – Loughman, who starts at loosehead prop, Prendergast who is covering lock and Jack Crowley, who is cover out-half.

All three featured for Ireland ‘A’ against the All Blacks XV last weekend along with Max Deegan, who is named on the bench and is line for his second cap having made his debut against Wales in February 2020.

Deegan, Prendergast and Crowley were part of the successful Emerging Ireland tour to Bloemfontein.