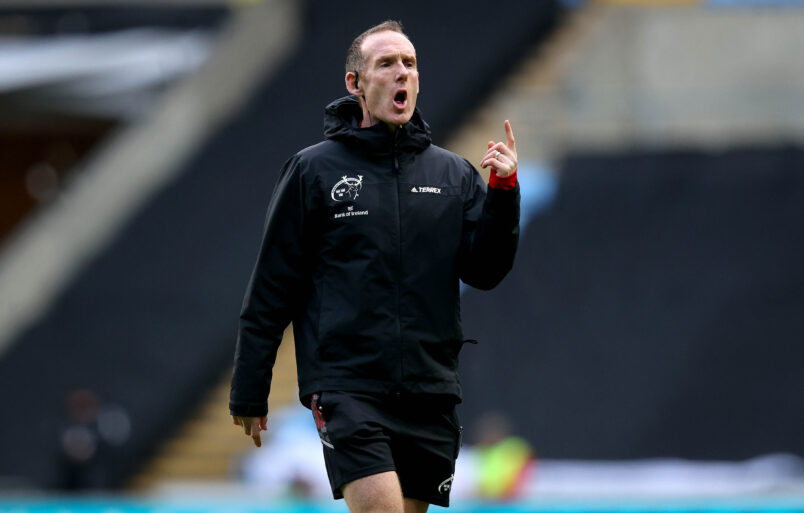 We spoke to Greencore Munster Rugby Academy Manager Ian Costello for the final Academy Update of the season.

Academy players made 45 Munster senior appearances this season with Alex Kendellen featuring in 20 of the province’s 26 fixtures.

Academy players made 87 appearances for their clubs over the course of the season.

Eight Munster players have been named in the Ireland U20s squad for their upcoming Summer Series in Italy with full details here.

Hear the latest from Ian Costello below.

“A really good exercise and a good chance to give our Academy guys another game. A few senior players played as well and we included seven or eight U19s to give them some exposure to the Ireland U20s coaches for next year.

“Off the back of that, Andrew O’Mahony just got selected on the Ireland U20s group and hooker Gus Harrington is on standby so it was a very useful and productive exercise.

“Unfortunately, Darragh French ruptured his achilles so a pretty big injury and he has gone into a lengthy period of rehab.

“Pat Campbell injured his thumb in training with the Ireland U20s last week so that’s being assessed at the moment but he has been ruled out of the tournament over the summer.” 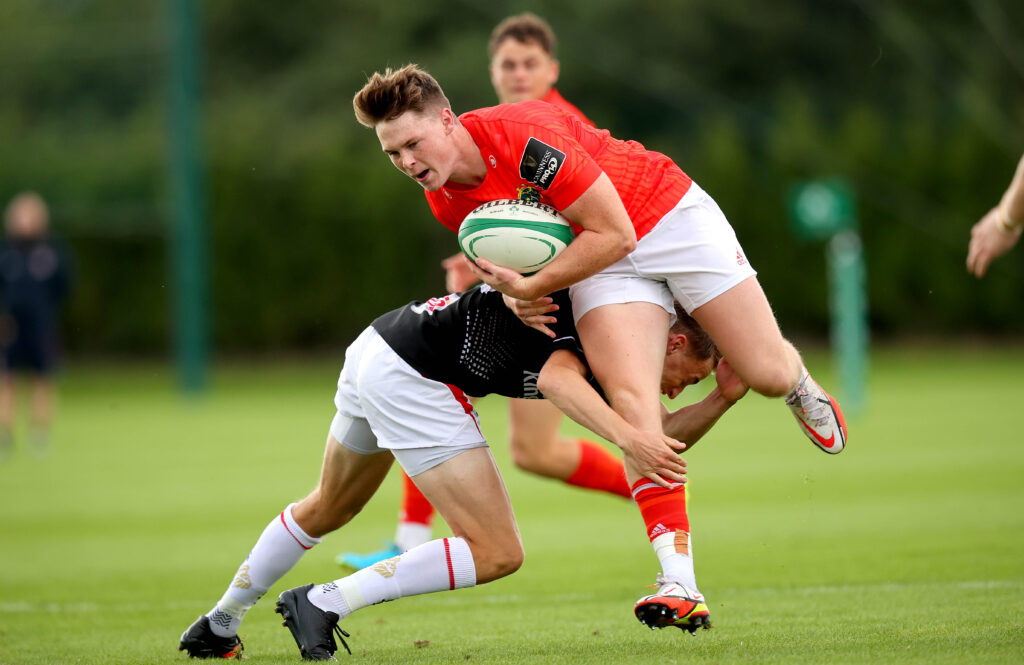 There is unfortunate news for Darragh French as he ruptured his achilles.

“We had a real focus this year on the level of communication with club coaches around the availability of players. We’ve tried to be really proactive in being at as many games as possible and increasing our visibility at grounds.

“We’ve gone out to visit clubs on Tuesday and Thursday nights and just really trying to work on that connection and those relationships with the clubs where the majority of our Academy players play.

“That’s been a real success this year and now this is the formal piece to it, there’s a commitment to the clubs that we have an official engagement a number of times a year.

“We did one at the start of the year and this one is just to review how things went this year and to outline some plans that we have for next year, to develop those connections a bit further and ways we can support each other.

“We have some good ideas around workshops and open days and resources that maybe we can support our clubs with, and just keep building up that communications piece.

“It’s vital for us that Munster clubs go well. Strong Munster clubs equals a strong Munster team, that’s pretty much our message. It’s an opportunity for them to provide us with some feedback on what went well and what things we can do better too.”

“Very different stories among the six lads. Kieran Ryan and Darragh McSweeney played lots of club rugby this year with Shannon in their run to promotion, they featured in the matchday 23 almost every single week. At the age of 19 for front row forwards to get that exposure and to have the success they had this year with the club is probably what caught our attention.

“They were part of the NTS [National Talent Squad] programme anyway so very excited to see those guys come through in a position that we need to develop a lot more depth and competition.

“Jack Oliver is again quite young, at U19 level this season, and a very promising scrum-half. He’s had an inconsistent couple of years based on injury but he’s somebody who showed an awful lot of promise last year in the Interpros.

“With Patrick Patterson going up to the senior team, there was an opportunity to bring in another scrum-half. It will be good to see himself and Ethan Coughlan compete over the next year or two.

“The two boys straight out of school, Ruadhan Quinn and Evan O’Connell, it’s important to recognise exceptional talent coming through the schools and clubs system. Even at that age we feel like we’ve seen enough from them to bring them straight into the Academy.

“That’s the beauty of the work we’ve done the last year, we’ve had a lot of exposure to them with the NTS, they’ve done a lot of 7am sessions throughout the season. With the work that Tom Tierney and Mark Butler have done with those younger NTS players, it just means we can make more informed decisions earlier.

“The two of them went out and played very prominent parts in the Ireland U18 and U19s squads over Easter. That probably confirmed what we already knew in that these guys deserved their place immediately. Exciting to get two young lads in with so much potential.

“Fionn Gibbons is very, very powerful. He’s a big, strong, physical centre and probably has areas of his game that as they improve would put him into a very good position to compete going forward. It’s a position in our squad that we need more depth and competition so hopefully Fionn has a good campaign with Ireland in Italy on the back of the Six Nations he had and hits the ground running with us in August.

“We’ve got some very exciting young centres in the province at the moment but they probably need another 12-24 months to come through the system.

“There were a number of players around the same age as Fionn, the injured Darragh French being one of those. As much as you want to have a focus on homegrown talent where possible, it’s important as well that you marry that up with getting the best quality of player into the system.

“It helps that Fionn has some very strong Munster connections, his mother is from Cork and his father has lived in Limerick and they have quite strong links and associations with the province.” 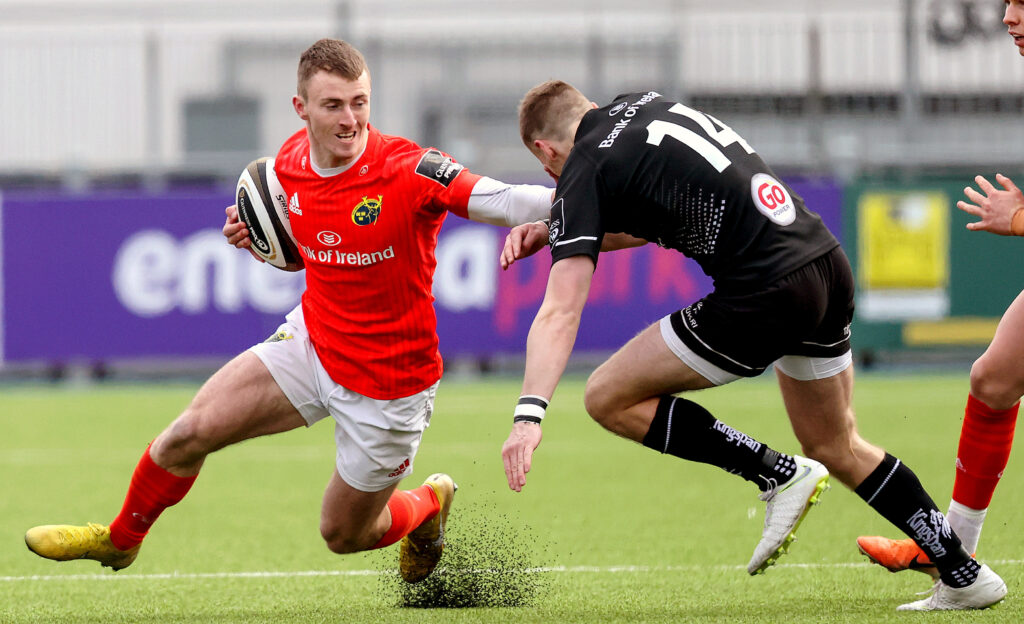 Jonathan Wren in action for Munster A in January.

Jonathan Wren retiring from the game on medical grounds…

“Jonathan is an exceptional character. He’s come back from a number injuries and that puts him into a pretty special category in that he’s had the resilience and determination to come back from those setbacks.

“He’ll take a bit of time away from the game but he’s in an excellent position in that he’s done his degree successfully, which is a big part of our programme as well because unfortunately not everybody can make it through for various reasons.

“He’s going to pursue other avenues and hopefully his time in the Academy will have prepared him for that. We have no doubt that he’s going to be successful in whatever he decides to do, he’s just that type of character.”

“It’s exciting times for Pat and we’re delighted that he’s going to be at the club for three more years and hopefully a lot longer.

“He will spend one more year in the Academy before moving up to the senior squad. The Academy is a huge part of that foundation piece [for young players]. That development stage in the pathway is massive for the lads to lay the groundwork to have a successful career.

“It’s not just rugby, it’s not just technical or tactical – it’s physical, it’s mental, it’s social. The support that the Academy provides and the level of resources it provides will allow him to continue with his studies and other interests that he might have and to get that balance right.”