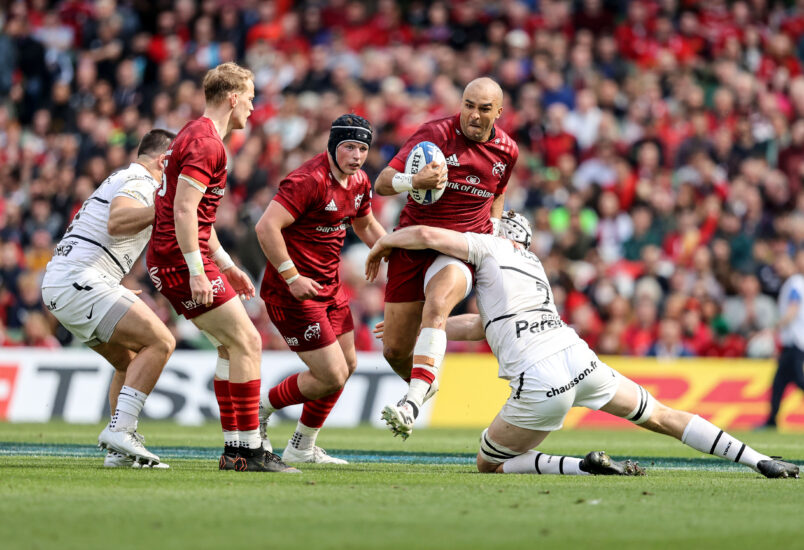 Take a look at the stats from the 2021/22 campaign that saw Munster compete in the Champions Cup and the inaugural United Rugby Championship.

Following a 24-all draw against Toulouse after extra-time in the Champions Cup quarter-finals, Munster were knocked out of Europe by the French champions after a place-kicking competition.

A disappointing performance in Belfast saw Ulster knock Munster out at the quarter-final stage of the URC as the province’s campaign ended with a 36-17 defeat.

In total, 58 players featured for Munster this season (46 senior, 10 Academy and 2 club players) over 26 games.

Ben Healy was Munster’s top points scorer with 125, ahead of Joey Carbery (108 points).

On average, Munster scored 27 points per game and conceded 18.

There were debuts for 14 players this season, including eight Greencore Munster Rugby Academy members and two club players.

There have been Champions Cup debuts for 21 players. All of the players above, other than Osborne, made their first appearances in the Champions Cup along with Thomas Ahern, Diarmuid Barron, Jack Crowley, Jack Daly, John Hodnett, Alex Kendellen, Keynan Knox and Roman Salanoa.

There were 45 appearances for Academy players this season with Alex Kendellen featuring in 20 of the province’s 26 fixtures.

Stephen Archer (248 caps) moved up to second on the province’s all-time list of leading appearances ahead of Billy Holland.

Dave Kilcoyne became the 11th player to reach the 200-cap landmark for Munster.

Jean Kleyn made his 100th appearance and Chris Farrell surpassed the 50-cap landmark.

Simon Zebo overtook Anthony Foley to become Munster’s record try-scorer in the Champions Cup after his double against Wasps.

Jack O’Donoghue was included in the initial longlist for European Player of the Year after the Pool stages.

Craig Casey and Jean Kleyn were named in the 2021/22 URC Dream Team.

Club captain Peter O’Mahony, Jack O’Donoghue and Tadhg Beirne all captained Munster this season with Beirne captaining Munster for the first time in the win over Ulster.

Jack O’Donoghue and Fineen Wycherley both played in 23 of Munster’s 26 games this season with Jack edging Fineen on minutes played, notching up 1,638 minutes compared to Fineen’s 1,569.

In all, there were 180 appearances for senior and Greencore Academy players for their clubs in the All Ireland League this year.

Those 180 appearances were spread across 33 players.

The weekend of January 21/22 was the highest for AIL representation over the season as 19 players lined out in round 11 of the AIL.

Greencore Munster Rugby Academy lock Eoin O’Connor made the most club appearances this year as he played 14 games for Young Munster.

Seán French (Cork Constitution) and Declan Moore (Shannon) made the most appearances from the senior squad with the duo each featuring in 12 club games.

Thomas Ahern was called up by Ireland for the first time as a development player.