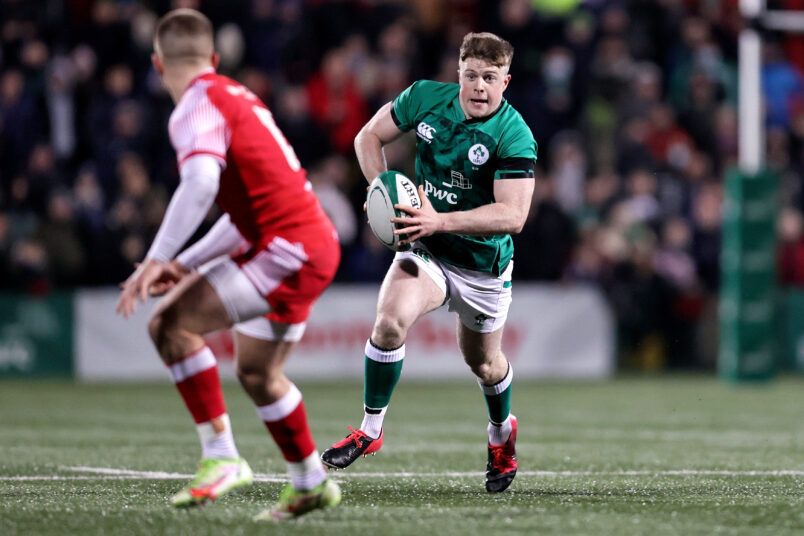 Munster duo Patrick Campbell and Ethan Coughlan both start with Tony Butler, Darragh McSweeney and Conor Moloney among the replacements.

Murphy has made four changes in personnel to his starting XV from last weekend’s bonus point win over Wales in Cork, with Aitzol King, Daniel Hawkshaw, Ethan Coughlan and Rory McGuire coming into the side for the trip to France.

King joins Patrick Campbell and Shane Mallon in the back three, with Hawkshaw partnering Ben Brownlee in midfield. Coughlan, who made his Munster senior debut in the Heineken Champions Cup before Christmas, comes in at scrum-half alongside Charlie Tector at out-half.

There is just one change in the pack with McGuire drafted into the front row alongside Jack Boyle and hooker James McCormick. UCD team-mates Mark Morrissey and Conor O’Tighearnaigh continue in the second row, while Reuben Crothers once again leads the side from an unchanged back row. James McNabney and James Culhane, who was the PwC Player of the Match last Friday, complete the line-up.

Commenting ahead of the game, Murphy said: “We were pleased with the performance and result in Round 1, but we’ve had to turn the page quickly ahead of a big challenge on Friday night. The players acquitted themselves well last week and we have been able to focus on the areas of our game that need refinement this week. There is no greater test than going away to France and the group are excited about that challenge.”