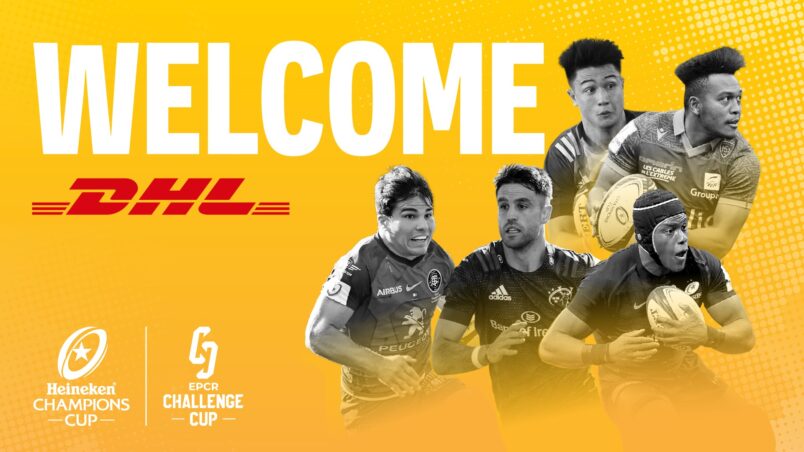 EPCR is delighted to announce that DHL Express, the world’s leading international express logistics provider, has become the latest addition to its commercial portfolio as an official partner of the Heineken Champions Cup and EPCR Challenge Cup.

The agreement will see DHL provide customised logistics solutions for both tournaments while enhancing EPCR’s current suite of commercial partners which includes Heineken, Tissot, the Financial Times, Gilbert and Kappa.

As a long-standing global sponsor of rugby-related partnerships including Harlequins, Munster Rugby, DHL Stormers, the British and Irish Lions, the World Rugby Sevens Series and Rugby World Cups, DHL are well-positioned and perfectly-placed to support the further development of both the Heineken Champions Cup and Challenge Cup as EPCR looks to extend its reach into new markets.

Following the new EPCR shareholder agreement which was concluded earlier this year, and ahead of next month’s opening round of matches in the 2021/22 season, there are many initiatives underway particularly on new digital platforms to build on the enduring success of the Heineken Champions Cup – with overall TV audiences of close to 32 million last season – as well as on the passion of fans, clubs, players and partners involved in EPCR’s tournaments.

François Vergnol, EPCR’s Marketing and Commercial Director, said: “As we enter an exciting new era for the world’s leading club rugby tournaments, with expansion into new territories and new, improved competition formats, we are receiving excellent feedback from global brands regarding our partnership opportunities. In this context, and given our growing global logistics needs and challenges, we are delighted to welcome DHL to our family of commercial partners.”

Mike Parra, CEO Americas and Global Head of Sponsorships, DHL Express, said: “DHL has become synonymous with rugby across the globe, with many shared values such as speed, passion, right first time, excellence and teamwork. We are thrilled to join the EPCR family and look forward to delivering for them, both on and off the pitch. Our partnership presents a unique opportunity for us to engage with the teams, our customers and the many fans in Europe, and across the globe and we look forward to playing our part in delivering rugby to the world.”

The new Heineken Champions Cup and EPCR Challenge Cup season gets underway on the weekend of 10/11/12 December with the 2022 finals scheduled for the Stade Vélodrome in Marseille on 27 and 28 May next.