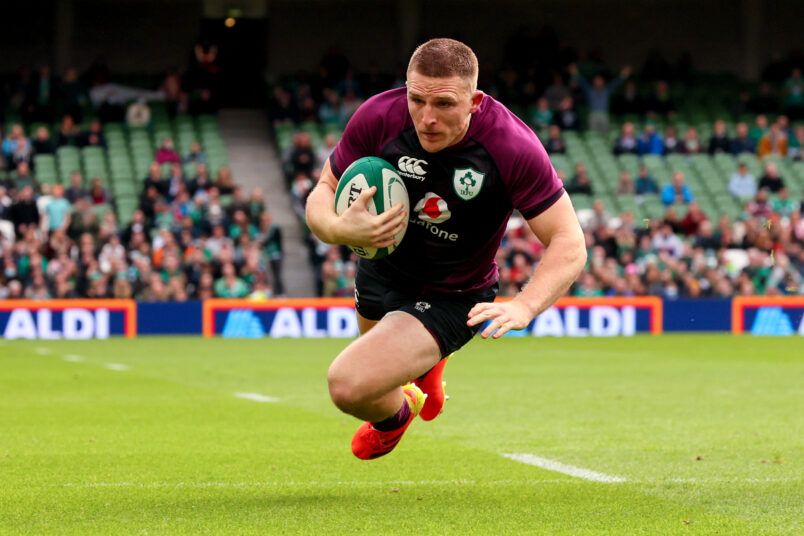 Andrew Conway scored a hat-trick for Ireland against Japan. Inpho

The majority of the squad returned to the HPC this week ahead of the next block of fixtures that begins with a two-match tour to South Africa in less than three weeks.

Munster A will be back in action on Friday as they face the Connacht Eagles at UL (2pm).

While there was no Munster fixture at the weekend, there were 24 Munster men in action for eight different teams.

Damian de Allende started for South Africa in their 23-18 victory over Wales in Cardiff.

Ethan Coughlan, Ben Healy, Calvin Nash and James French made their first AIL appearances of the campaign with 23 Munster players featuring for their clubs in the opening five rounds for a total of 52 appearances.

Read a full round-up of the AIL action here.

Young Munster are the new leaders of Division 1A after their 19-9 win away to UCC with Eoin O’Connor starting the clash and Calvin Nash featuring off the bench.

Cork Constitution were 23-21 winners away to Garryowen with seven Munster players involved.

Ben Healy scored a try and kicked 11 points for Garryowen with Mark Donnelly, Cian Hurley and Paddy Kelly also featuring for the hosts.

Paddy Patterson was a try-scorer for UCD in their 42-17 victory over Ballynahinch.

On the injury front, RG Snyman has undergone surgery after rupturing his anterior cruciate ligament (ACL) last month and will begin his rehab.

Rory Scannell has completed the return to play protocols.

Gavin Coombes will not train with the Ireland squad this week as he continues his recovery from illness.