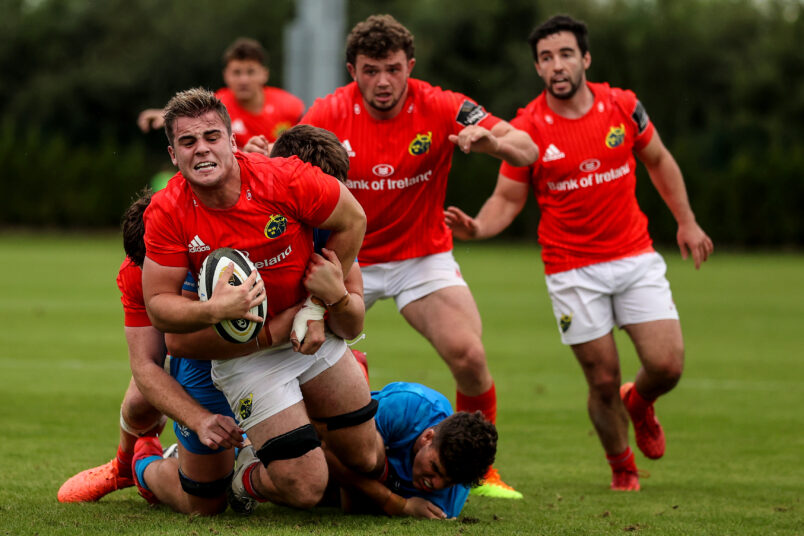 Despite producing a commendable effort over the course of the contest, Munster Development fell to a 14-point defeat at the hands of Leinster Development at the IRFU’s High Performance Centre on Friday.

Having gotten the better of an Ulster Development XV in a recent clash at the Dublin venue, the Red Army were hoping for a similar result on this occasion. However, courtesy of first-quarter tries from Martin Moloney and Luke Callinan, it was Leinster who claimed the spoils.

Munster pushed for scores until the very end of the contest, with full-back Patrick Campbell and replacement Tony Butler taking the game to their eastern counterparts at every available opportunity, but they couldn’t break down a stubborn Leinster defence.

Ian Costello’s men had shown their intent during the early moments, with fly-half Jack Crowley – a Triple Crown winner with the Ireland U20s in 2020 – kicking a penalty to touch in the third-minute. Yet, the Leinster defence held firm to force a turnover and subsequently establish territory in the opposing half of the field.

Like his direct opponent Crowley, David Hawkshaw decided against a shot at goal on seven minutes and instead opted for a line-out deep inside the Munster ’22’. This proved to be a shrewd decision as Leinster secured front-foot momentum off the resulting set-piece move and Moloney was on hand to ground underneath a slew of bodies.

Despite being at an awkward angle, Hawkshaw superbly judged a tricky wind to add the bonuses off the kicking tee. This was the beginning of a difficult period for Munster and they found themselves further adrift by the 15th-minute.

At the tail end of another powerful line-out maul, dynamic Leinster No 8 Callinan dotted down beyond the whitewash in clinical fashion. Another Hawkshaw two-pointer provided the Blues with additional daylight on the scoreboard, but there was still a lot of rugby left to play.

Munster were enjoying their fair share of possession with Jack Crowley and Paddy Patterson combining well in the half-back positions. Patterson’s lung-bursting run on 24 minutes asked questions of the Leinster defence, albeit they stood up to the mark just in time to squeeze out their opponents.

The leaders continued to pose an attacking threat of their own, however, with winger Callam O’Reilly jinking forward in fine style before the retreating Munster defence eventually caught up with him.

Although Patterson was close to picking out Seán French off a close-range scrum on 32 minutes, Munster were facing into a 14-point deficit at the interval.

Still, the Reds continued to play with great intent and it took diligent defence from Leinster to disrupt their attacking rhythm on the resumption.

Costello started to unload his replacement bench as the action progressed and each player introduced was eager to leave their imprint on the game. Aside from Butler, George Coomber, Daniel Okeke and Darragh McSweeney made their considerable presences felt.

Yet, Munster remained 14 points behind moving past the hour mark and with the majority of the play taking place around the middle-third of the pitch, it was to remain that way.

Credit must go to their defence, though, who dug deep to prevent Leinster extending their cushion in the closing minutes of normal time. David Hawkshaw was inches away from crossing the whitewash off a massive break, but the Munster rearguard halted him in his tracks and secured a turnover penalty.