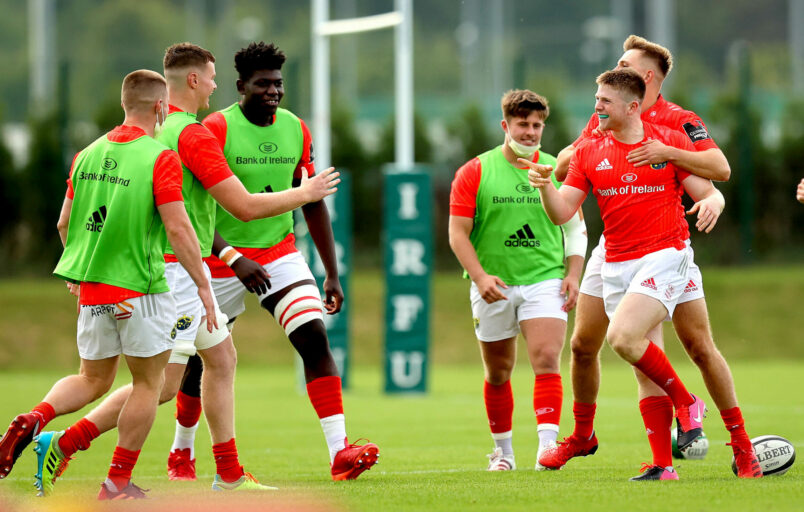 Patrick Campbell celebrates scoring one of his three tries. Inpho

Munster Rugby Development XV edged a gripping contest with Ulster Rugby to clinch a 25-24 victory at the IRFU High Performance Centre in Abbotstown on Saturday afternoon.

Munster Rugby Development XV edged a gripping contest with Ulster Rugby to clinch a 25-24 victory at the IRFU High Performance Centre in Abbotstown on Saturday afternoon.

Nine tries were tallied in an end-to-end match that saw Munster race into a 15-0 lead inside the opening 20 minutes with a double from PBC full-back Patrick Campbell and one by UCC hooker Scott Buckley.

Ulster responded with two scores in five minutes before the break through prop Callum Reid and flanker Reuben Crothers, whose effort was converted by James Humphreys for 12-15.

The excellent Campbell got his third shortly after the restart, Ulster’s Ben Carson replied then wing Jamie Shanahan of Garryowen FC crossed before replacement Scott Wilson set up a tense finish.

Ultimately the difference between the two sides was Munster’s fast start and Campbell, whose three tries and assist for the fifth kept them at arms-length on the scoring as Ulster fought hard to snatch the match right until the end.

Munster made a flying start with Campbell crossing from a sweeping backline move after six minutes, and was quickly followed by Buckley breaking away unopposed from a rolling maul to dot down in the 10th minute.

Ulster were twice held up over Munster’s line in a matter of minutes after Mark Donnelly of Garryowen FC was yellow-carded. However, Munster kept them scoreless and clinical Campbell raced away at the other end for his team’s third try midway through the half.

The Ulstermen passed up several more chances from penalties, including over-throwing an attacking five-metre lineout as they looked to break their duck, which they did once Fearghail O’Donoghue of Cashel RFC received a yellow card.

Prop Reid went over from close range in the 35th minute and right on half-time flanker Crothers powered through, with Humphreys’ extras making it a one-score game.

Soon after the restart, Campbell bagged his hat-trick when he broke through a challenge in midfield to dive over and extend Munster’s advantage to eight points.

Zac Ward, a half-time replacement for Ulster, broke through in attack on 63 minutes and fed the ball out for teammate Carson to cross for 17-20.

But on 70 minutes, three-try Campbell turned provider when he claimed an ‘up and under’ then broke through midfield and passed the ball wide for winger Shanahan to dive over.

Ulster set up a grandstand finish when substitute Scott Wilson went over with two minutes to go and replacement out-half Ross McKay landed the conversion to make it 24-25.

They got the final play up to the Munster five-metre line as they rallied in a bid to steal victory from under their noses, but knocked forward in the last act of an enthralling contest.