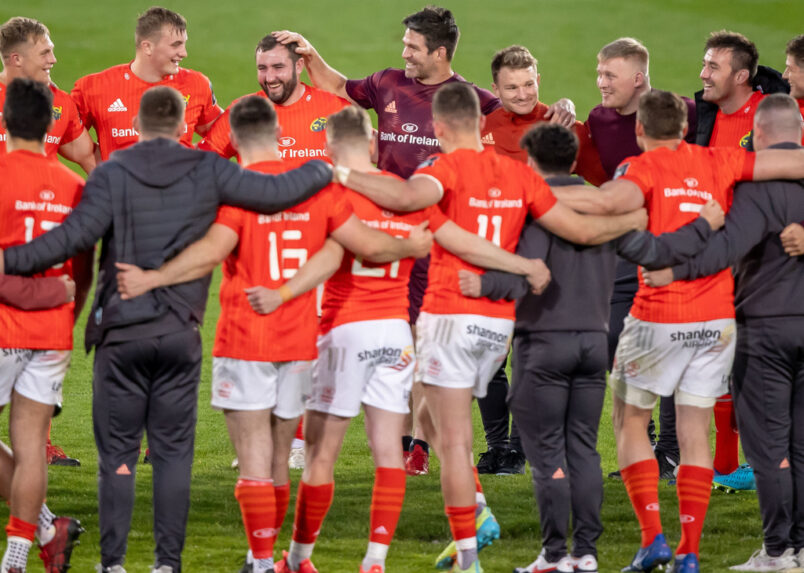 The Munster squad after the final game at Thomond Park this season. Inpho

Take a look at the stats and best pics from the 2020/21 campaign that saw Munster compete in the Champions Cup, the final season of the Guinness PRO14 and the one-off Rainbow Cup.

It will be all-change next year with the introduction of the United Rugby Championship in place of the PRO14. See full details of the new competition here.

There will be a revised Champions Cup format with four Pool games and two-legged round of 16 ties with more details on the format here.

The 2020/21 campaign saw Munster win 20 of their 25 fixtures and reach the PRO14 final and the Champions Cup knock-out stages. Munster suffered just two away defeats all year.

Leinster denied Munster in the PRO14 final at the RDS with a 16-6 victory and eventual European champions Toulouse secured a 40-33 victory in a Champions Cup classic at Thomond Park.

In total, 53 players featured for Munster this season (43 senior and 10 Academy).

Gallery | Click here for the best pics from the season

Gavin Coombes scored 15 tries in 22 appearances, the most tries ever scored by a player for Munster in a single season.

Coombes’ four-try haul in the final game of the season against Zebre equalled the player record for most tries scored in a Munster game as he shared the honours with Mike Mullins (2001) and Alex Wootton (2017).

Keith Earls’ two tries against Toulouse saw the winger move up to 59 tries, one behind record-holder Simon Zebo’s 60 tries.

JJ Hanrahan scored the most points with a total of 131 (three tries, 21 penalties, 25 conversions and one drop-goal).

Munster conceded the least tries in the Guinness PRO14 and the Rainbow Cup with no side securing a four-try bonus point against the province. There were 35 tries scored against Munster in 22 PRO14/Rainbow Cup games.

Gavin Coombes and Jack O’Donoghue led the way for appearances having both featured in 22 of Munster’s 25 games (17 starts each).

Mike Haley topped the charts for minutes on the pitch, playing a total of 1,468 minutes in his 19 appearances (all starts).

Damian de Allende was second in minutes played with 1,423 minutes in his 21 appearances.

Damian de Allende, Kevin O’Byrne and Billy Holland were all included in the Guinness PRO14 Dream Team for their excellent performances throughout the season.

Joey Carbery held a 100% kick success rate in the Rainbow Cup and was awarded the Golden Boot after making 16 kicks.

There were also Munster debuts for new signings Matt Gallagher and Roman Salanoa along with loanee Paddy Patterson.

CJ Stander and Conor Murray made their 150th Munster appearances with Stander also playing his 50th Champions Cup game as Chris Cloete, Fineen Wycherley and Jeremy Loughman  made their 50th appearances for the province.

Beirne and Stander were named in the Six Nations Team of the Championship with Stander making his 50th international appearance.

Beirne and Murray were included in the British and Irish Lions squad for their tour to South Africa with Damian de Allende and RG Snyman included in the Springboks squad.

Academy player Alex Kendellen was named as captain of the Ireland U20s for the Six Nations.

Out-half Ben Healy led the way with senior appearances on the Academy front this season having featured in 17 of Munster’s 25 games, scoring 87 points.

In total, there have been 47 senior appearances for Academy players this season.