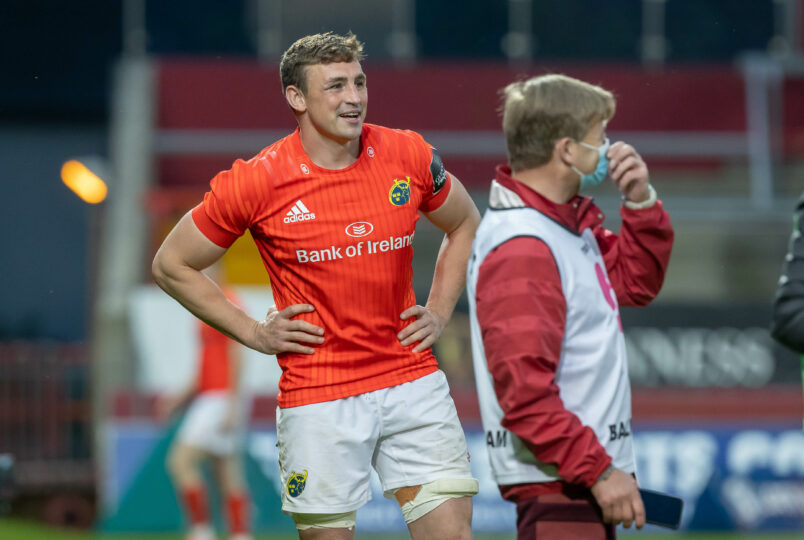 Tommy O'Donnell after his final game for Munster against Cardiff Blues in May. Inpho

Take a look back at some of Tommy O’Donnell’s career highlights as the one-club man has completed his time at the province and retired from professional rugby.

Take a look back at some of Tommy O’Donnell’s career highlights as the one-club man has completed his time at the province and retired from professional rugby.

O’Donnell made 187 Munster appearances since his debut in 2007 and earned 13 caps for Ireland.

“My family and I are looking forward to the new chapter ahead. My passion and belief in Munster Rugby will always remain unwavering. I look forward to looking on as a supporter and bringing my boys to experience the magic of a packed Thomond Park in the years to come.”

A product of Clanwilliam FC, O’Donnell lined out for UL Bohs in the AIL and made his Munster debut against Scarlets in 2007 as a 20-year-old Academy player.

He was part of the Ireland U20 Grand Slam-winning team of 2007 and was named Academy Player of the Year in 2009. After featuring in Munster’s famous win over Australia at Thomond Park in 2010, the 2011/12 season saw O’Donnell firmly establish his place in the back-row and he won the Munster Player of the Year award in 2013.

His rise continued with a first Irish cap against the USA in June 2013 and he played in Emerging Ireland’s 2014 Nations Cup-winning campaign.

O’Donnell made his Six Nations debut against Scotland in 2014 and contributed in both Championship-winning campaigns in 2014 and 2015.

Despite suffering his fair share of injury setbacks over the seasons, most notably a hip dislocation that kept him out of contention for the 2015 World Cup, dogged determination always saw O’Donnell return fitter, stronger and hungrier from everything thrown his way.

He led Munster to victory in their historic win over the Maori All Blacks in November 2016 – his first time captaining the side, and made his 150th appearance against Racing 92 in 2017.

Munster Rugby Partner Up With Master Chefs And Copia Green