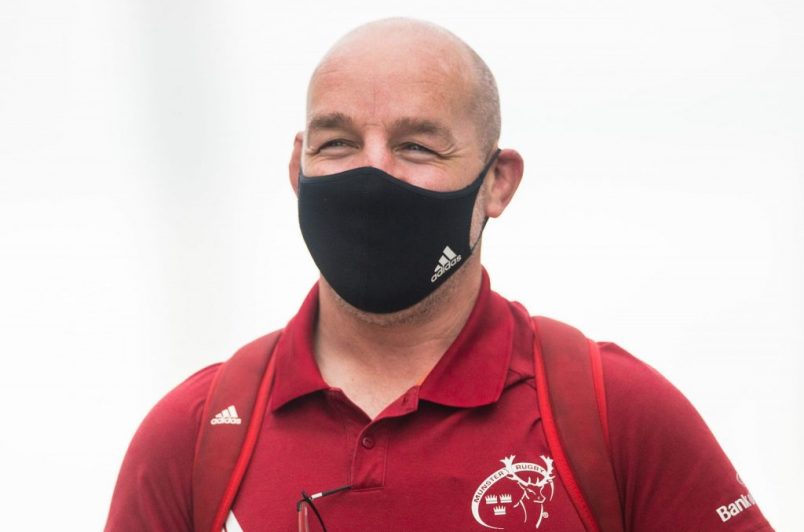 Peter Malone ahead of last Saturdays win for Munster A over Connacht A. Inpho

We spoke to Elite Player Development Manager Peter Malone for the latest news from the Greencore Munster Rugby Academy as our young players returned to the HPC last week.

Malone oversaw Munster A’s 22-19 win over Connacht A at the Sportsground on Saturday with 13 Academy players featuring.

How is the Academy player who tested positive for Covid-19?

“Thankfully he’s feeling good and has minimum symptoms so it’s a very mild case so far. The player is being supported by our doctors and medical team the whole time and is in good form.

“The protocols and processes that have been put in place are working. The player followed the procedures, he’s isolating and four other players are isolating as well and there have been no further positive tests so far.

“It’s a sign that the procedures put in place by Munster and Irish Rugby are working and the group is back training.”

Good run-out against Connacht on Saturday…

“It was really great to be back out playing rugby again, most of the lads hadn’t played a game in seven months.

“They were really excited all week in training, it was a much younger group – almost like kids going back to play their first U15 game!

“They were really positive, full of energy and the game itself was like that. There was some really good stuff but, as expected, some rustiness as well with guys not having played for seven months.

“Our Academy players had been training separately up until halfway through last week but we got some really good performances, the work ethic and effort was excellent.

“Guys got a game under their belt now and we’re really happy with it. I spoke to the Connacht coaches afterwards and they got what they wanted out of it as well, which is a high-intensity game and everyone getting a significant number of minutes. We had no injuries as well which is very positive.”

“Alex [Kendellen] has come straight out of school and he was very comfortable playing at no.8, Scott [Buckley] had a good 25 minutes and Jack Crowley covered 10 and 12 for us so good experience for him as well. We were very happy with all of them.”

Returning to the HPC last week…

“The alignment we have had over the last six months [during the lockdown period and pre-season] has been excellent. Even though we were doing our pre-season in Thomond Park, we kept in touch with everything through Microsoft Teams meetings with the senior coaches.

“The Academy players and staff have integrated back into training at the HPC and the plan is to stay as one bubble here in the HPC with the senior team and then review it every few months.

“Last week we were back in here with a few senior players but this week the full group is in so there’s a great buzz around the place and good energy.”

Any news on the injury front?

“Eoin O’Connor (lock) underwent a significant operation on his knee last month and is going to be out for the season. He had issues with his knee and the rehab wasn’t working so it was the best option for him.

“James French (prop) had a minor operation on his neck and he will hopefully be back in the frame in December.”