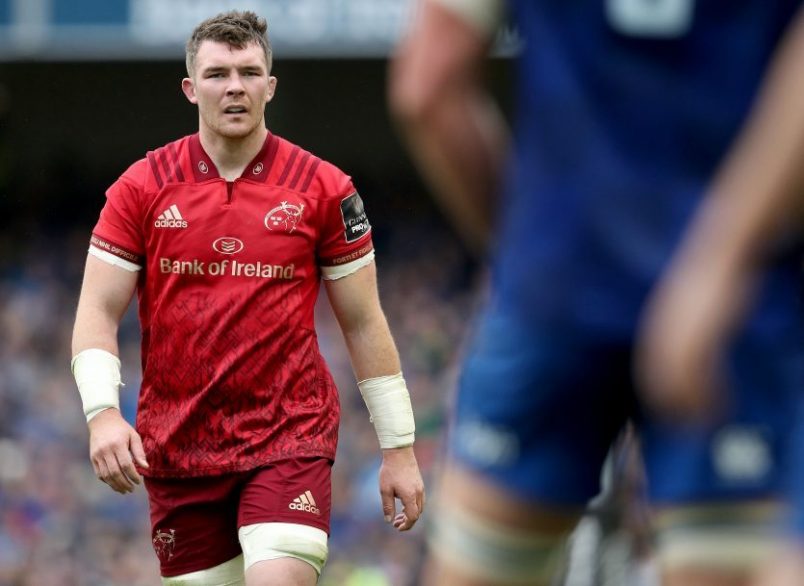 Peter O'Mahony in action against Leinster earlier this season.

Munster’s quest for silverware takes Johann van Graan’s side to the RDS on Saturday afternoon with Champions Cup holders Leinster lying in wait in the Guinness PRO14 semi-final (3.15pm).

With the teams in different Conferences, Munster finished the regular season with 69 points as the second placed Conference A side and Leinster secured 70 points to top Conference B.

The two previous clashes between the sides this season saw Leinster come out on top with a 23-17 win at the Aviva Stadium and a 34-24 victory at Thomond Park.

Head Coach van Graan joined the province in November and presided over the 10-point loss at Thomond but can see there is a belief in the squad that they can reach next week’s decider in the Aviva.

Van Graan said: “Obviously they’re the favourites playing at home and champions of Europe, but that’s the beauty of sport and the beauty of the human spirit, it’s a new game, new ball, new referee, new teams, and looking forward to it very much.

“I don’t need to convince our players [that they can win]. They believe it. This is a club that believes in themselves. We cannot control the opposition. In this case, it is Leinster and while we give them all the credit that is due, the players believe it themselves, and they said after the Racing game that they want to win a trophy.

“In order to do that, we need to get past opponents in the semi-final, it’s Leinster on Saturday afternoon. We believe we can do it, that is the only thing we can control.

“I’ve only coached against Leinster once and they had a very good first half and we had a very good second half. You can’t deny the fact that over the last nine years, they’ve won the Champions Cup the most but going back to the PRO14, one point separated the two sides throughout the whole season, we’ve played the same amount of games. They’ve had some really good games and some average games, so have we. My belief in rugby is that every week’s different. This is a whole new ball game.”

Munster captain Peter O’Mahony knows this Leinster team better than most having faced the province many times over the years with a number of the Leinster players Ireland team-mates of O’Mahony.

“It’s gonna be hard, probably the hardest game we play all year, but it has to be our best performance,” said O’Mahony. “Surely that’s what you want to do as a professional rugby player, any professional athlete, you want to challenge yourself against the best.

“We’ll be talking about our performance and what we have to do to go out and win. I don’t want people saying after the weekend: ‘ah, Munster to be fair aren’t far off Leinster’. That’s not what I want.

“If we play well, I want people saying Munster played well, that’s what I want to hear. I don’t want to hear: ‘they’re close enough’.

“Leinster, what they’ve done for the last 12-18 months, we’re not going to change that in a game. That’s the standard they have. We’ve all got to strive to try and get there.

You’re going to get the best of Leinster at the weekend and they’ll show that’s their standard. It’s a semi-final for them at the end of the day, they’ll be ready to go, whatever it takes.”