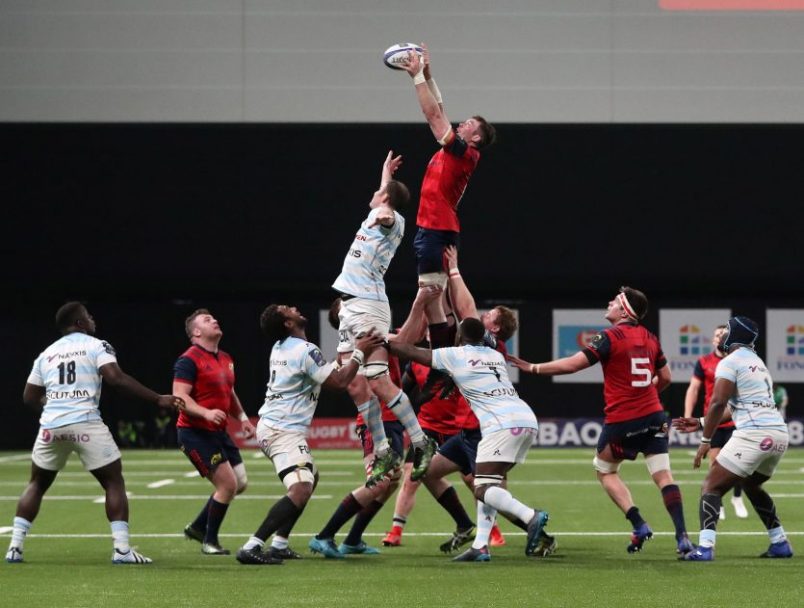 Peter O'Mahony wins a lineout against Racing 92 at the U Arena earlier this season.

A trip to France for a Champions Cup semi-final is familiar territory for Munster as the province prepare for Sunday’s huge clash against Racing 92 in Bordeaux (4.15pm local/3.15pm Irish time, live on BT Sports).

Munster are participating in their 13th Champions Cup semi-final, no other club has played in more than 10, but this stage has consistently proven a difficult obstacle with Munster progressing from four of their 12 semi-finals.

Seven of those semi-finals have been away to Top 14 clubs (including one against Biarritz in San Sebastian) with Munster winning two of those encounters: the famous victory over Toulouse at Stade Chaban-Delmas in 2000 and a further success against Castres in Béziers in 2002.

Racing 92 meanwhile have reached this stage for the second time having beaten Leicester Tigers 19-16 in their only previous semi-final in 2016.

The clubs have met six times previously with Munster winning four and losing twice, the teams met twice in the pool stage this season with the home side on the day winning each encounter.

Of the four semi-finalist clubs, Munster’s Ian Keatley has scored the most tournament points this season with 71. CJ Stander leads the tournament stats for carries with 105 in his seven matches to date and Peter O’Mahony is the top lineout exponent with 43 takes.

Racing’s Leone Nakarawa has just one carry less than Stander with 104 and tops the offload charts with 19.

Racing were Champions Cup finalists two years ago with two-time champions Munster last winning this competition in 2008, the last year that the province reached the final.

Historically, 28 of the 44 European Cup semi-finals to date have been won by the club with home country advantage – a 64% success rate.