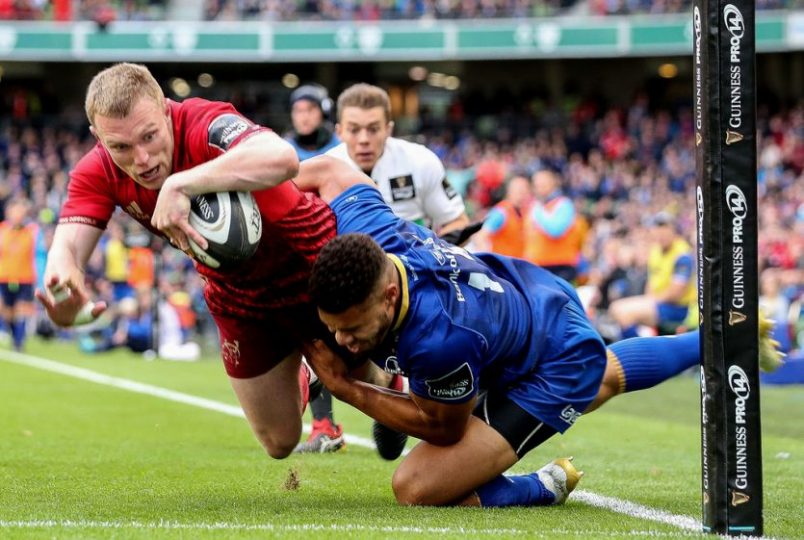 With more than half of the season having flown by, we take a look back at Munster’s campaign to date with the province well placed in the Guinness PRO14 and European Champions Cup.

With more than half of the season having flown by, we take a look back at Munster’s campaign to date with the province well placed in the Guinness PRO14 and European Champions Cup.

Check out the best photos from the season so far in our gallery here.

Munster lie second in Conference A of the Guinness PRO14 with seven wins from 12 fixtures thus far this season.

Munster are the top try-scorers in the PRO14 so far this season with 51 tries and boast the second best defensive record in Conference A behind leaders Glasgow.

Seven try bonus-points and three losing bonus-points have put Munster on 38 points after 12 games with four of the five defeats coming at the hands of our Interpro rivals.

The Warriors are well clear at the top of the table and third-placed Cheetahs are nine points behind Munster although the South African club have two games in hand coming up against Southern Kings.

The province lead Champions Cup Pool 4 with 15 points from four games and are undefeated with three wins and a draw – away to Castres Olympique.

Munster opened their European campaign with a 17-all draw in Castres before they defeated Racing 92 14-7.

That was followed by an outstanding double win over Leicester Tigers last month. Those victories saw Munster become the first side to beat Leicester in both games of the double-headers since they were introduced in 1999.

The victory at Thomond Park saw the province surpass 4,000 points in the competition thanks to Rhys Marshall’s first-half try while the Welford Road win was Munster’s first at the venue in 11 years.

The province boast the meanest defence in the Champions Cup with just 50 points conceded in the four games to date and CJ Stander is the competition’s leading carrier with 71 after four rounds.

Ian Keatley leads the scoring charts with 97 points as Alex Wootton became just the second Munster player in history to score four tries in a PRO14 game against the Cheetahs in September, equalling Mike Mullins’ record from 2001.

Winger Wootton is the province’s top try-scorer so far this season with seven tries and has also gained more metres (678) and made more carries (104) than any of his team-mates while Duncan Williams has the most passes (104).

Billy Holland has started all 16 games so far this season while Stephen Archer made his landmark 150th appearance for Munster against Ulster on New Year’s Day.

There was a record attendance at Thomond Park for the St Stephen’s Day game against Leinster as additional seating helped to cater for a fantastic 26,267 crowd.

In both of Munster’s Champions Cup games, the attendances (22,054 at Munster v Racing 92 and 23,503 at Munster v Leicester Tigers) were the highest in rounds 2 and 3 of the competition.

Two of the three games played at Irish Independent Park have sold out with the Cork venue full of 8,008 supporters for the clashes against Ospreys and Dragons.