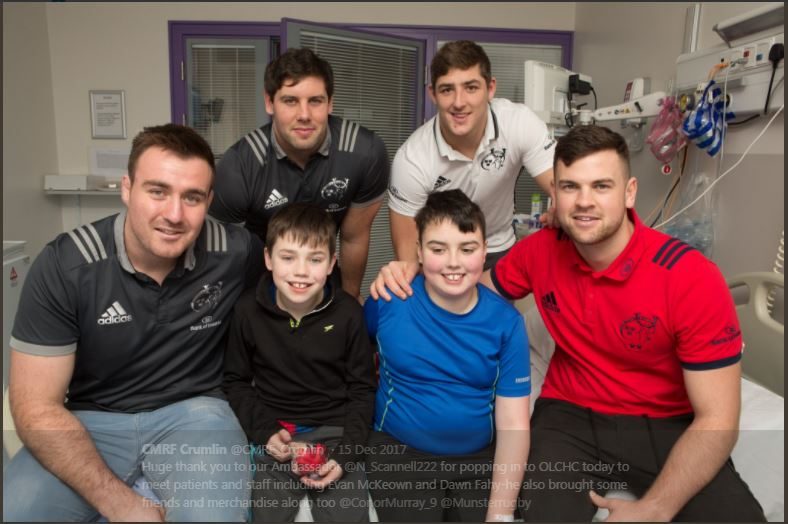 In supporting a host of club, school, charity and community initiatives, Munster players and staff have made their way across the province in recent weeks. Here is but a sample of their recent visits.

In supporting a host of club, school, charity and community initiatives, Munster players and staff have made their way across the province in recent weeks. Here is but a sample of their recent visits.

A host of Munster Rugby stars brought some Christmas joy to a six-year-old fighting a life-threatening illness at Limerick’s Dreamland, while another group of players made a surprise visit to sick children at Our Lady’s Children’s Hospital in Crumlin.

Munster fan Ben Reidy, 6, from Clare, had his dreams come true by meeting five players from the team, who helped him to celebrate his birthday at the Share a Dream facility in the city.

“We can’t thank Munster Rugby enough for always being there and helping us bring a little magic into the lives of children who are fighting an uphill battle against terrible life threatening illnesses,” said the Share a Dream founder.

“The five lads were all wonderful ambassadors and are truly, caring young men who spent so much time with little Ben,” he added.

While the lads in Limerick brightened up Ben’s day, another five players made their way to Dublin to spread some Christmas cheer at Crumlin Children’s Hospital. Crumlin ambassador Niall Scannell, Conor Murray, Dave O’Callaghan, Conor Oliver and Dan Goggin were all on hand to meet patients, staff and families in offering their best wishes and support.

Click here if you wish to donate to Crumlin Children’s Hospital. Munster’s Billy Holland recently got behind the Mercy Hospital Foundation’s Decembeard campaign in helping raise funds and awareness for Bowel Cancer, the disease, its symptoms and the need for early diagnosis.

An average of 2,436 new cases of bowel cancer are diagnosed in Ireland every year and 1,040 deaths to cancer annually are due to Bowel Cancer. In over 90% of cases, bowel cancer can be successfully treated if diagnosed early enough. The Academy players and coaches recently visited the Mid-West Simon Community warehouse on the Dock Road in supporting an essential volunteer effort as they helped pack 500 bags of food parcels which were distributed to people in need across the mid-west during the Christmas period.

Mid-West Simon supports 2,000 people weekly with food aid across the region and is the second largest distributor of the FEAD programme in Ireland. A group of the players also went to Mid-West Simon’s family hub and spent time meeting and playing with the kids currently housed there.

Commenting on the visit, Eleshia Fahy, Team Leader of the family hub, said, “It was such a treat for the kids, especially at this time of year. The Munster Academy boys were great with them, they stayed long over the time they had planned for and it was a great experience for all.”

Mid-West Simon CEO, Jackie Bonfield, paid tribute to all who took part; “Christmas is a time when we see communities coming together to support each other and those most in need. Munster Rugby once again have shown their support for Mid-West Simon and the community in which they themselves are so much a part of.”