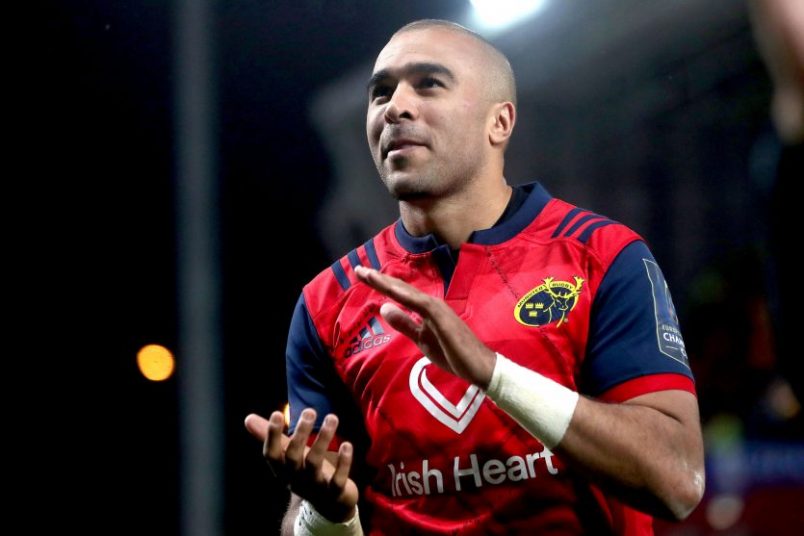 Simon Zebo celebrates after the game on Saturday. INPHO/Bryan Keane

Munster Rugby and the IRFU can confirm that Simon Zebo will depart the province at the end of the current season.

The 27-year-old winger and fullback has attracted the interest of several European clubs who have offered terms that Munster and the IRFU are unable to match despite both the province and the Union making every effort to retain the player with substantial improvements made to his existing deal.

Munster Rugby CEO Garrett Fitzgerald said:  “Working closely with the IRFU we put ourselves in the best position possible with an excellent offer, and while we are largely successful in retaining our best players within the Irish system we know it is out of our hands on this occasion.

“We are hugely disappointed to see Simon leave but we wish to thank him for his immense contribution to the province and wish him and his family all the best for the future.”

Commenting on the news Simon Zebo said:  “This club has moulded me into the player and person I am today and I will forever be grateful for that.  It has always been my dream to play for my home club, wearing the red jersey while representing my family, friends and local community.

“However, I have always noted the draw to play abroad one day, and in not taking this decision lightly I have decided on what’s best for my family.  With my partner Elvira and two young children, Jacob and Sofia, we are planning for our future and this is the right time for us to make the move.

“As much as I will miss everything about this place – the players, staff, supporters and friends for life – I know there are many more special nights in Thomond Park and Irish Independent Park to be had.  I will continue to enjoy wearing my jersey with pride and will give my all in making sure Munster are successful this season.”

Born in Cork, Simon is a product of the Munster pathway, playing with PBC and Cork Con while advancing through the underage representative sides and moving from the academy on to senior ranks.  He has played on 124 occasions to date, making his debut against Connacht at the Sportsground in April 2010, and is Munster’s record try scorer leading the way with 55 tries (his most recent coming against Castres in round one of the Champions Cup).

On the international front Zebo has played for Ireland on 35 occasions, scoring 9 tries, and toured with the Lions in Australia in 2013.