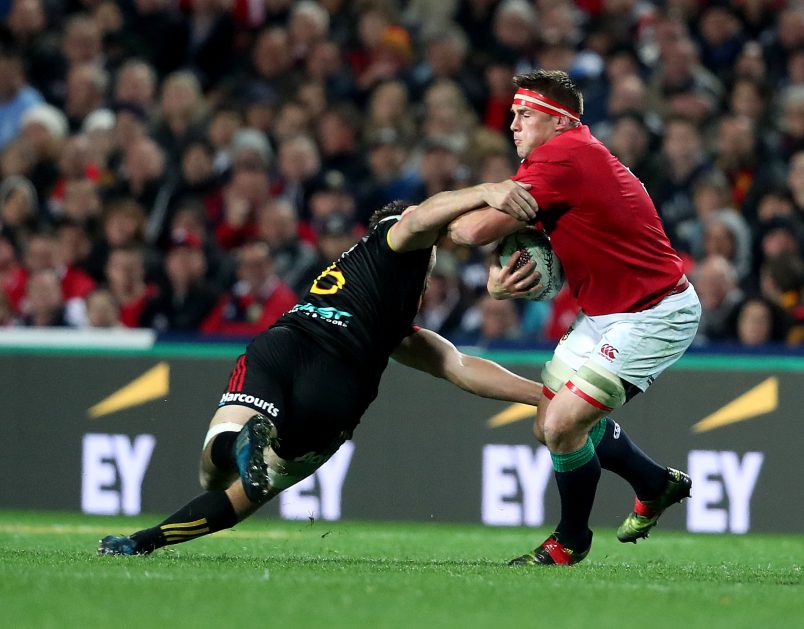 Stander has been a large presence in this midweek team thus far, here swatting Chiefs' Mitchell Brown aside - INPHO/Dan Sheridan

CJ Stander will start once again for the Lions as they face Super Rugby champions the Hurricanes in Wellington tomorrow (7.35pm Local time/8.35am Irish).

Stander has already started against the Auckland Blues – where he dotted down – the Highlanders, and the Chiefs, and came off the bench in the representative’s side impressive win over the Crusaders.

Stander has been a tour de force in the breakdown, winning five turnovers in the four games thus far for the Lions, making 40 tackles, and gaining 140 metres with the ball in hand as he continues to show his value in open play.

This is the last opportunity for the midweek side to show head coach Warren Gatland what they can bring to the test arena, with the Lions looking to overturn last Saturday’s defeat at Auckland, facing the All-Blacks in their second test this Saturday.

“We know there are a lot of players motivated to go out and get a result for the whole group” said Gatland, ahead of the midweek side’s biggest test thus far against a Hurricanes team that beat another group of Lions – the South African side – to win their first Super Rugby title last August.

“A few players put their hands up for selection from the Chiefs game and played their way into the Test team so they know that there is another opportunity for them on Tuesday against the Super Rugby champions.”

Stander’s Ireland teammate Rory Best captains the side once again, with Robbie Henshaw, Iain Henderson, and Jared Payne all involved from an Irish point of view.