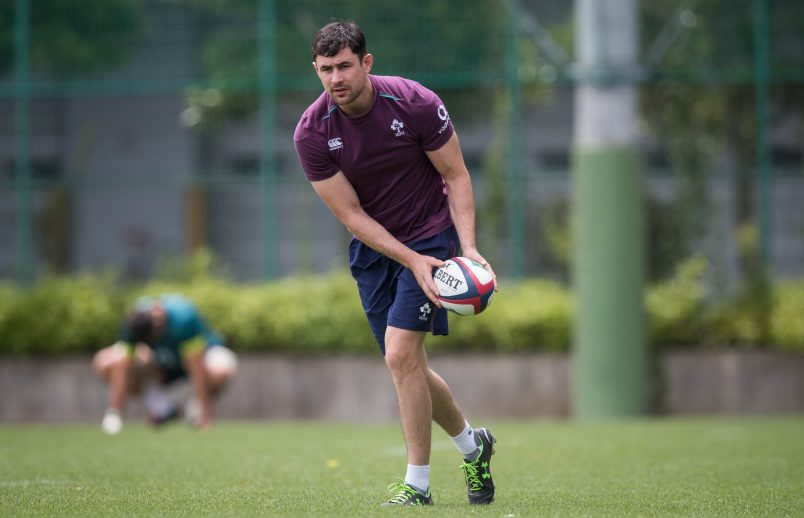 Felix Jones is this week rounding off his first season in the coaching ranks, doing so with the Irish team as they prepare for the final Test of the Summer Tour to Japan tomorrow morning.

A neck injury sustained against Glasgow in October 2015 cut short a hugely successful playing career in which he claimed a Grand Slam with Ireland U20, won a Magners League medal as part of 90 Munster appearances, and helped Ireland to the 2015 6 Nations title, winning a total of 13 international caps.

Once namechecked by former Munster, Ireland and Lions captain Paul O’Connell as ‘one of the greatest players that has ever played for Munster’, with great ‘values, drive, attitude and mental strength’, it was never going to be long before Jones was back involved with the province.

The start of the 2016/17 season saw the Dublin native join the Munster coaching setup as Technical Coach and his successful transition from player to the backroom team was evidenced by his role in Munster’s on-field achievements over the past nine months.

Ireland Head Coach Joe Schmidt has long stated his admiration for Jones’ work ethic and recognising his potential as a coach, along with that of Ronan O’Gara and Girvan Dempsey, the national boss invited all three to different stages of Ireland’s Summer Tour – O’Gara joining the squad ahead of the USA game, Dempsey ahead of the first Japanese game, with Jones linking up for the final week of the Tour in Tokoyo.

Looking back on his week to date, Jones commented, “It’s been great.  Obviously I’d be somewhat familiar with the setup from a players’ point of view but to see it from the other side has been really interesting and valuable.”

When asked about the transition from playing to coaching, he added, “Challenging for sure but I’ve been lucky that I’ve been guided well by Rassie (Erasmus), Jacques (Nienaber) and Fla (Jerry Flannery) in Munster and obviously I’ve got to speak to Joe (Schmidt), Greg (Feek), Simon (Easterby) and Richie (Murphy) over here.  Having people around you and helping you is pretty important.

Elaborating on his role this week, he said, “It’s been very welcoming but if I’m being honest I’m not doing a huge amount – it’s more of a learning experience and you throw in your two cents in wherever you can.

“At this level these guys have everything pretty much covered so it’s been a great learning.”

Having just signed a new two-year deal with Munster, on his return Jones will assume the expanded role of Backline and Attack Coach.

A total of six Munster players have been named in the side to face Japan at the Ajinomoto Stadium in Tokyo tomorrow – ko 6.40am (Irish).