Strong Championship Finish For Ireland U20 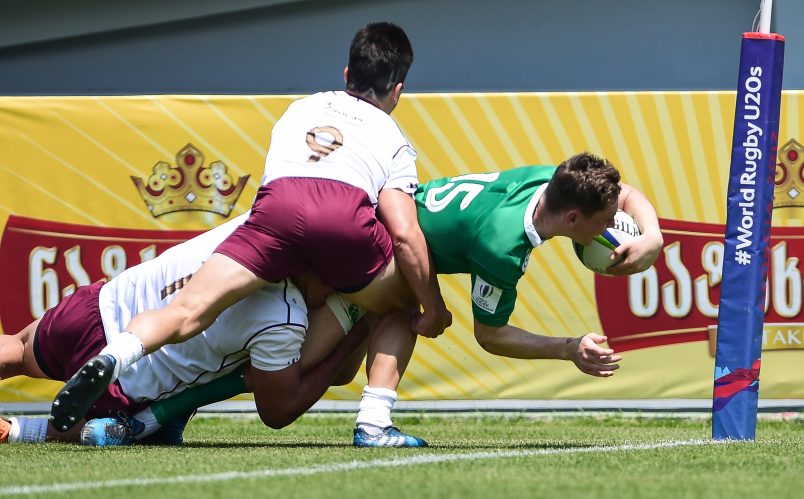 Alan Tynan scores a try for Ireland U20 against Georgia yesterday. ©INPHO/Lasha Kuprashvili

Munster’s Alan Tynan was among the try scorers as Ireland U20 finished out their World Rugby U20 Championship on a winning note with a hard fought victory over hosts Georgia.

Last year’s runners up, a raft of injuries before and during the campaign took its toll on the Irishmen’s chances and three straight pool losses to Italy, Scotland and New Zealand saw them in danger of missing out on next year’s Championship.

A comprehensive win over Samoa allayed fears, and with their spot guaranteed, they set about ending the campaign on the right note in the 9th place play-off against the Georgians.

As hosts, Georgia were never going to be an easy prospect and the Irish cause was not made any easier when danger-man Calvin Nash of Young Munster left the field injured on 6 minutes.

Incidentally, it would be another Cookies representative, Alan Tynan, who crossed for the game’s first try, but when Guram Gogichashvili’s score cancelled it out, it was Georgia who held the upper hand at half time, leading 10-7.

However two early tries in the second half from Caelan Doris and captain Paul Boyle would ultimately be the difference, Georgia scrum half Gela Aprasidze’s wonderful solo try not enough to deny Peter Malone’s young charges a tough yet deserved win on a 24-18 scoreline.

Season 2016/17 In Review With Jerry Flannery