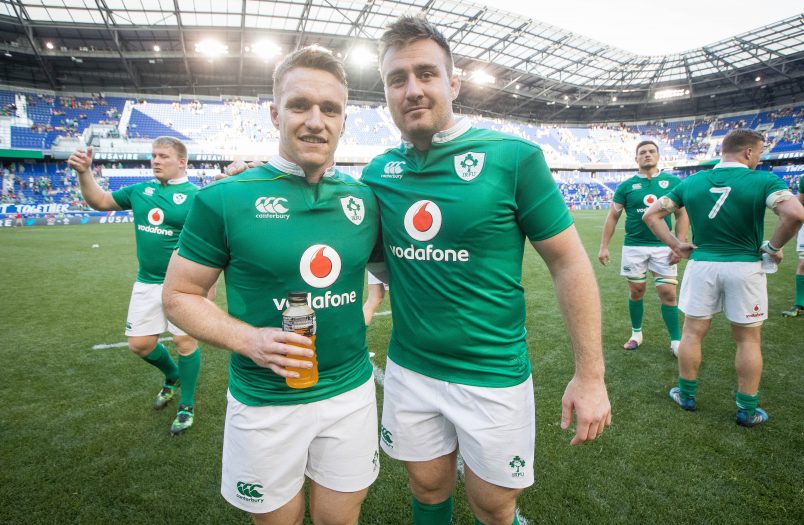 BROTHERS IN ARMS: Rory and Niall Scannell after the USA test - INPHO/Ryan Byrne

Brothers Niall and Rory become first Munster siblings to line out together in a test game for Ireland during professional era.

Rugby has often been a family affair in Munster, with the likes of the Ryans (Tim & Dave), the O’Mahony’s (Barry & Ronan), the Hayes’ (John & Tom) and of course the Wallace trio amongst others all lining out for the province at different times in the last 25 years.

While the latest generation brothers Bill and Dave Johnston faced down Zebre in this season’s PRO12, the Scannells of Niall and Rory were again celebrating following their part in Ireland’s win over the USA last weekend.

The pair are well used to sharing a pitch, between their days at Presentation Brothers College, Dolphin RFC, and became the first pair of brothers to start for Munster in a PRO12 game last season away to the Dragons, and in New Jersey last Saturday were reflecting, having become the first Munster brothers to wear Irish jerseys together on the test arena in the professional era.

With their father and sister in America for the occasion, Niall’s fifth cap for Ireland will be particularly fondly remembered in the household, as the younger Rory joined him on the field in the green of Ireland at half-time, marking a momentous occasion in the pair’s meteoric rise through the ranks.

“It’s an exciting day for us and a great family occasion” said debutant Rory; so special to have made his debut alongside his brother. “I’m delighted to win a first cap and it was even better to have the brother out there as well. It was a lot tougher than the scoreline suggested. It was a real physical clash and they kept coming at us. We dug deep for each other and it means a lot so it was good. I’m happy.”

Niall is a spring chicken himself in the Irish setup, but with four caps already under his belt and having taken part in thsis year’s Six Nations, would have been on hand to guide his younger sibling through the process, and feels the first cap was just reward. “He’s developed parts of his game,” the older brother observed. “Moving from 10 in his younger years he has the distribution game and kicking game. People may have questioned his physicality at 12, but I think he has put an exclamation mark around that this year.

Not a whole lot of time to soak in the moment, however, the squad have passed through 16 time zones in the last week or so to play first on the east coast of America, and then in the upcoming game against Japan, and no sooner had the game in Harrison finished than the squad were travelling again, a however, short moment with their family was in order. “It was literally a bit of a handshake, then they were going back into the city and we stayed in New Jersey.” said Niall. “It was great still for Rory on a big day like that and for my dad to get over and my sister, who is in the States for the summer, to get down for it.”

“Obviously, it was a huge day for Rory, especially to get a full half. It was brilliant that he had an impact on the game, which was brilliant. Your first cap you want it to be a significant bit of game time. He’s been banging on the door so it was brilliant to see him get the cap. Great day for the family. He’ll be looking to kick on if he gets his chance this week.

“I’m a bit jet-lagged but everyone is in the same boat. Hopefully we’ll turn the page on Wednesday and we’ll be back on local time and we can kick on – obviously, we have limited training time with the travel and stuff so we need to be really sharp around what we do on Thursday. It certainly won’t be an excuse going into a big test game like this.”

Ireland play their first test against Japan at the 50,000 capacity Shizouka Stadium in Fukuroi on Saturday. Kick-off is at 2pm local time (6am Irish time) and will be shown live on eir Sport.