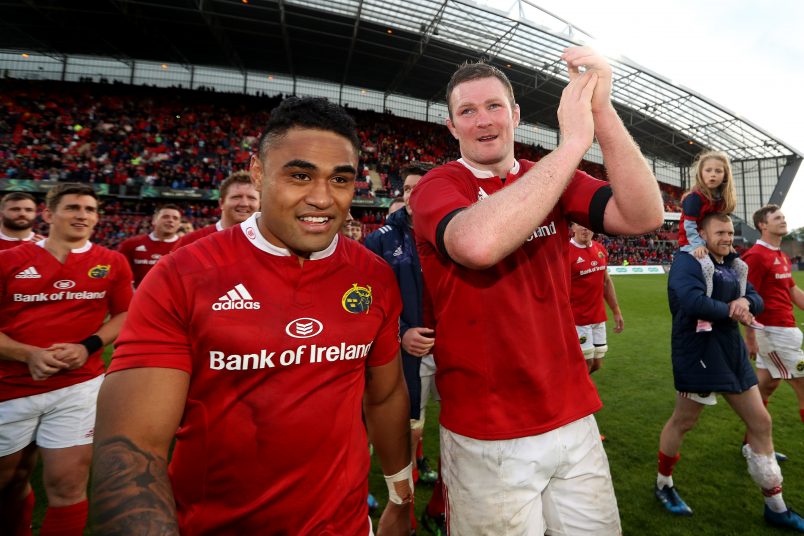 A veteran of 167 appearances and winner of a Heineken Cup and two league titles, Donnacha Ryan enjoyed a storming 2016/17 season in both red and green, and makes the move to the French Top 14 next season where he will join Ronan O’Gara’s Racing 92.  Given yesterday’s Champions Cup pool draw, the Tipp-man’s return to Thomond Park may come sooner rather than later.

Dave Foley is another man France bound.  After 84 appearances with his native province, the Clonmel native follows in the footsteps of Munster-men James Coughlan, Paddy Butler and Sean Dougal and joins Top 14 outfit Pau.

While injury blighted much of his final season at Munster, All Black Francis Saili nonetheless made a total of 40 appearances for Munster, scoring nine tries, perhaps most crucially away to Glasgow Warriors in January where his magical score sent Munster back to the European quarter finals for the first time in three years.

Each playing a part with Munster A this season, the quartet of Cian Bohane, Mark Chisholm, Peter McCabe and John Madigan finished out their time at the province with silverware.  Bohane captained the side to just it’s second British and Irish Cup title, staging a magnificent comeback from 18-nil down to win 29-28.

Here is but a snapshot of their collective contributions to Munster Rugby.