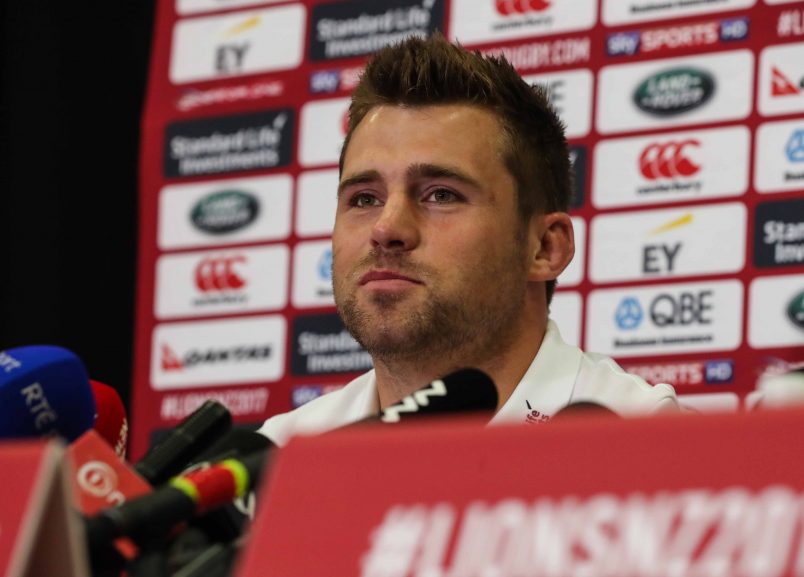 CJ Stander was on media duty for the Lions this week. ©INPHO/Billy Stickland

When CJ Stander first attended a Lions Test in his native South Africa in 2009, he could scarcely have imagined that eight years later he would be lining out for the touring side on their long awaited return to New Zealand and the mighty All Blacks.

Two of those playing in red that day would later become his teammates, in a slightly different shade of red.  Paul O’Connell captained the Lions on the 2009 Tour with Ronan O’Gara coming on as a replacement.  A legend of the Munster back row, David Wallace, also featured in Pretoria, and although he and Stander’s paths never crossed in the province, the South African has nonetheless followed in Wallace’s footsteps with bulldozing back row performances in both the Munster and Irish jersey. Here’s hoping he can now follow suit in a Lions strip.

The 27-year-old starts at number 8 for tomorrow morning’s clash with the Blues at Eden Park and he, more than most, should have the inside track on what to expect from the Super Rugby side.  Stander made 16 Super Rugby appearances for the Blue Bulls, scoring four tries, prior to his migration to the northern hemisphere in 2012.

“It was quite special,” said Stander when recalling Pretoria in 2009, “I just remember the boys coming out and putting in some shift. I think they were unlucky at the end. But yeah, that’s my first live memory anyway.”

On the task at hand tomorrow morning, he added, “Yeah, they’re a good team.  I think they’ve eight All Blacks in, they’re a great team. I’ve played against them, a few more years back, and I’ll know some of the stuff they’ll do.”

In just his second week with the squad following Munster’s extended involvement in the Guinness PRO12, the flanker has settled in well to life as a Lion for the coming weeks.

The PRO12 Final defeat, and the manner of it, was a bitter pill to swallow for Stander and his fellow tourists Conor Murray and Peter O’Mahony, but a frantic Lions playing and training schedule leaves little room to dwell on end of season disappointment with the province.

“There wasn’t time for hanging around and that made it a bit easier. I was in a car with all the Scarlets boys to the airport and on the plane and down to the hotel. There were talking about the win and I was the only Munster boy not part it.  When we got together Sunday it made it easier because everyone has different stories and now you’re in something different you’re part of, you have to get your new role set in the game. That made it easier.”

Adversary turned ally, Justin Tipuric was one of those who reigned supreme for Scarlets in the Final, and now starts alongside Stander in an imposing Lions back row that also boasts England blindside James Haskell.

“I think both of them look after the breakdown and both bring physicality. If they look after the breakdown, I can probably get on the ball on the next one.  Haskell has a big physical presence, he puts in big shifts of tackling and ball-carrying. It makes it easier now just to put my head down and concentrate on my game. If I get my hands on the ball, the aim is to carry well. And in defence, I’m trying to make sure I’m on the same page as him with physicality.  When you put on a Lions jersey you can’t make excuses. It’s the best of the best out here and you need to make yourself ready for training and for games so you just need to put your hand up and try to perform.”

The British and Irish Lions face the Blues in Eden Park tomorrow morning at 8.35am (Irish).

Prior to his departure to New Zealand, Stander chatted with Duncan Casey on Episode 4 of ‘The Crooked Feed’, MunsterRugby.ie’s official podcast series.  Listen below.