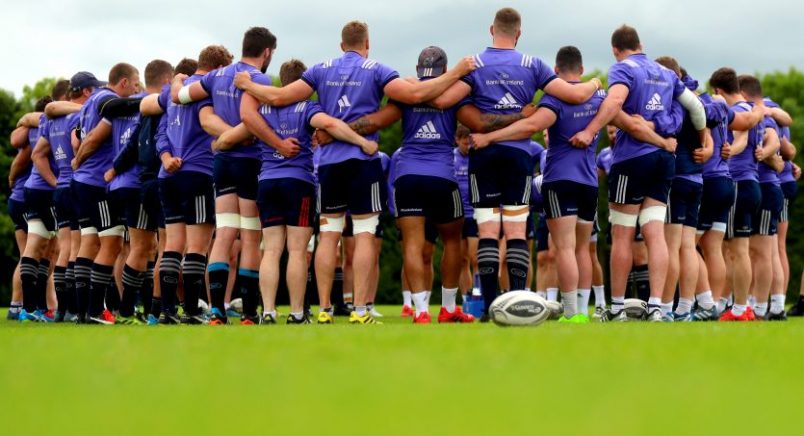 Check out the stats of a rollercoaster 2016/17 season, one that saw Munster play 33 capped games, including an historic win over the Maori All Blacks.

With the Peter O’Mahony as squad captain, the trio of Tyler Bleyendaal, Billy Holland and Tommy O’Donnell also led the squad in O’Mahony’s absence during different stages of the season.

Across the Guinness PRO12 and Champions Cup, Munster scored 858 points, including 106 tries, while in defence, Jacques Nienaber’s system boasted the best defensive record in both the PRO12 regular season and European pool stages, conceding a combined total of just 38 tries (38 & 4).

19 wins from 22 regular season games also saw Munster top the PRO12 table with 86 points – the most ever recorded by a club in the competition’s history.

On the European front Jaco Taute, Brian Scott, Tyler Bleyendaal and Darren Sweetnam made their Champions Cup debuts against Glasgow Warriors at Thomond Park in October; Thomas Du Toit, Jean Kleyn and Rhys Marshall did so against Leicester Tigers in Limerick in December; Angus Lloyd and Jean Deysel making theirs in the knock out stages against Toulouse and Saracens respectively.

In qualifying to the knock-out stages as the second seeded team, records were set when Munster became the first side to secure a 9th home quarter-final and the first side to reach the semi-final stage for a 12th time. The province also played the most games in Europe’s premier competition, with their 158th encounter against Saracens at the Aviva in April.

In terms of player milestones, Donnacha Ryan won his 150th Munster cap against Zebre in October, as did Ian Keatley against Connacht in May, and Conor Murray made his 100th appearance in the Guinness PRO12 Final.

As regards tries scored in competition, Andrew Conway leads the way with 11 touchdowns. His back-three colleague, Ronan O’Mahony, also dotted down 11 times, one of which came in the capped game against the Maori All Blacks.

50 was the magic number for Simon Zebo in Munster’s away trip to Racing 92 in January, the province’s all-time record try scorer also becoming the first player to reach a half-century of tries in the red jersey.

When it comes to points scored, the boot of Tyler Bleyendaal has the playmaker out in front with 2 tries, 63 conversions and 35 penalties in 27 appearances, bringing his tally to 241 points for the 2016/17 season.

Munster’s win over Zebre saw Ian Keatley surpass 1,000 points scored for Munster, becoming just the second player in history to do so. In 152 appearances, the playmaker has notched up 1,063 points and is second only to Ronan O’Gara (2,560) in the all-time points scored list.

Consistent and an ever present leader among the pack, Billy Holland played the most minutes of the entire squad with a gargantuan 1,940 minutes of game time in 29 appearances – not to mention an Ireland debut during the November series.  Prop Dave Kilcoyne made the most appearances in playing his part in 31 games, starting 21 of them.

On the British and Irish Cup front 42 players played their part for Munster A in the title winning campaign this season, with David Johnston and Brian Scott the only two to start every game.  Captain Cian Bohane led the club to B&I Cup honours for the first time since April 2012.

Thomond Park and Irish Independent Park continued to draw crowds all season long with supporters turning up in huge numbers and getting behind the team. A total of nine home sell-outs were recorded while last weekend’s Guinness PRO12 Final in the Aviva Stadium set a new attendance record of 44,558.